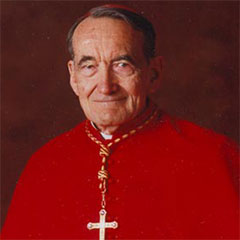 Avery Cardinal Dulles, S.J., came to Fordham in 1988 as the inaugural Laurence J. McGinley Professor of Religion and Society. An internationally known author and lecturer, he was born in Auburn, New York, on August 24, 1918, the son of John Foster Dulles and Janet Pomeroy Avery Dulles. He received his primary school education in New York City, and attended secondary schools in Switzerland and New England. After graduating from Harvard College in 1940, he spent a year and a half in Harvard Law School before serving in the United States Navy, emerging with the rank of lieutenant.

Upon his discharge from the Navy in 1946, Avery Dulles entered the Jesuit Order, and was ordained to the priesthood in 1956. After a year in Germany, he studied at the Gregorian University in Rome, and was awarded the doctorate in Sacred Theology in 1960. He was created a Cardinal of the Catholic Church in Rome on February 21, 2001 by Pope John Paul II, the first American-born theologian who is not a bishop to receive this honor.  Avery Cardinal Dulles died peacefully in the Lord on December 12, 2008 at the Jesuit Infirmary at Murray-Weigel Hall on the campus of Fordham University. 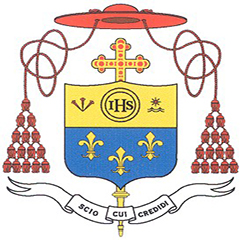 The author of over 750 articles on theological topics, Cardinal Dulles has published twenty-three books including Models of the Church (1974), Models of Revelation (1983), The Catholicity of the Church (1985), The Craft of Theology: From Symbol to System (1992), The Assurance of Things Hoped For: A Theology of Christian Faith (1994), The Splendor of Faith: The Theological Vision of Pope John Paul II (1999; revised in 2003 for the 25th anniversary of the papal election), The New World of Faith (2000), Newman (2002). His latest book, a revised edition of The History of Apologetics, (revised edition, 2005), and Magisterium: Teacher and Guardian of the Faith (2007). The 50th anniversary edition of his book, A Testimonial to Grace, the account of his conversion to Catholicism, was republished in 1996 by the original publishers, Sheed and Ward, with an afterword containing his reflections on the 50 years since he became a Catholic.

Past president of both the Catholic Theological Society of America and the American Theological Society and Professor Emeritus at The Catholic University of America, Cardinal Dulles has served on the International Theological Commission and as a member of the United States Lutheran/Roman Catholic Dialogue. He is presently a consultant to the Committee on Doctrine of the National Conference of Catholic Bishops. He has an impressive collection of awards, including Phi Beta Kappa, the Croix de Guerre, the Cardinal Spellman Award for distinguished achievement in theology, the Boston College Presidential Bicentennial Award, the Christus Magister Medal from the University of Portland (Oregon), the Religious Education Forum Award from the National Catholic Educational Association, America Magazine's Campion Award, the F. Sadlier Dinger Award for contributions to the catechetical ministry of the Church, the Cardinal Gibbons Award from The Catholic University of America, the John Carroll Society Medal, the Jerome Award from the Catholic Library Association of America, Fordham’s Founders Award, Gaudium Award from the Breukelein Institute, the Newman Award from Loyola College in Baltimore, the Marianist Award from the University of Dayton, the Saint Thomas Aquinas Medallion from Thomas Aquinas College in California, St. Joseph’s Seminary Dunwoodie Annual Dinner Award, the President’s Medal from Canisius College in Buffalo, the Loyola medal from Seattle University, and 38 honorary doctorates.