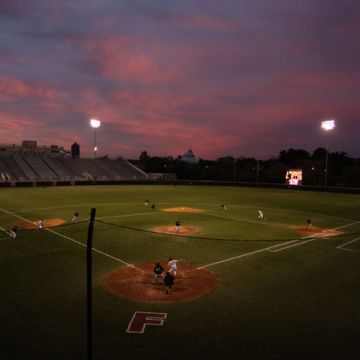 The year was 2006. After a two-year campaign, Fordham's intramural department was about to inaugurate baseball for the spring semester. Thanks in large part to the efforts of Michael Catsam GSB '06, and Patrick Pearson GSB '08, that first season was an enormous success. Four managers were chosen from a talented pool, a selection format agreed upon, and over 90 men trying out for four teams. There was even a draft to set team rosters. 12 games were played over the last eight weeks of the semester.
Two years later, students began petitioning for a club team on campus. After intensive lobbying and an endorsement from the head varsity coach, Fordham's athletic administration green-lighted the creation of the department's newest club sport. Charter members Casey Hunt, Bryan Scheblein, Carlo Coumoutsos, Brian Davidson and Frank Ferrara were appointed to the executive board, and worked tirelessly to create a program from scratch. Their organizational skills launched the program, and by the end of their first season in 2010, Fordham Club Baseball qualified for a divisional championship.

Fordham Club Baseball allows students from all across the country who share a love for the game of baseball to meet, practice, and compete alongside one another. The club affords talented athletes the opportunity of four more years playing the game they love and the support of a rock-solid group of dedicated teammates with whom to interact. Furthermore, Fordham Club Baseball boasts a strong alumni network for current players of all academic fields to avail themselves.

Every fall semester interested candidates have an opportunity to demonstrate their skills and vie for a spot on the roster. Tryouts for the 2020-21 season will be held in Fall 2020 at Houlihan Park (date and time TBD). Prospects should bring their own glove, catcher's gear and rubber cleats. Please wear appropriate baseball attire. You can contact officers Jon Pappanicholaou (jpappanicholaou@fordham.edu), Kenny Belanger (kbelanger@fordham.edu), or Brett Taylor (btaylor23@fordham.edu) with any questions.