The Edge of Astoria

An extensive range of architecture, infrastructure, and industry characterizes the northern perimeter of Astoria, Queens. I selected this area as the focus of my New York City Guide in part because I find it fascinating in its mix of land uses and architectural styles, and in part because I expect it is likely to change dramatically in the next two decades — the latter based both on recent patterns of development in the wider neighborhood of Astoria, and on a proposed zoning change for Rikers Island. My guide is a mix between a walking tour of historical sites in the area, a review of current land use, an informal photographic survey, and a long-term projection for neighborhood change. 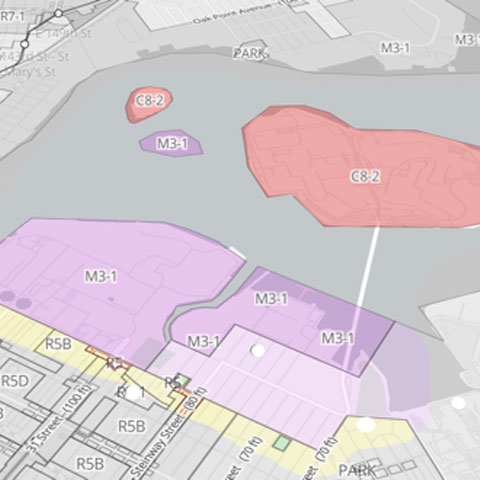 This zoning map shows how the land that is the focus of the tour is currently divided. The map has been adapted from its original version,2 with original shading greyed for emphasis. Yellow shading marks the edge of the residential zone and purple marks manufacturing; light purple marks light manufacturing (accessible), while darker purple (M3-1) marks heavy manufacturing (closed to the public). Pink (Rikers Island and North Brother Island in this map) are currently zoned as commercial.

land use: the current edge

The walking tour begins where East Elmhurst meets Astoria, taking the visitor along the main routes of 19th and 20th Avenues and onto the smaller 41st Street, Berrian Boulevard, and Steinway Place. The route traces what is essentially the edge of northern Astoria, moving east to west. Despite the neighborhood being bordered by the East River on both the north and the west, the tour does not hit the geographical edge, where the land meets the water, until its conclusion. Due to current land use regulations, much of this area is closed to the public; the majority is designated for heavy manufacturing. Guiding the visitor along the border between the manufacturing and residential zones, and into the section that is designated for light manufacturing and mixed-use, the walking tour follows what is, for the general public, the accessible edge of northern Astoria.

Read more about The Edge of Astoria 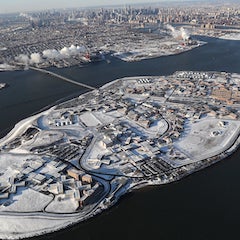 This New York City Guide is featuring The Rikers Island Jail Complex. The Rikers Island Jail Complex is an interconnected detention facility located on Rikers Island, an Island located in the East River between The Bronx and Queens and politically affiliated with The Bronx, New York. This New York City Guide will give you the history of the physical island, it will walk you through its transition from private ownership to its current jail complex as well as to discuss the political processes and legislation that affected its creation and projected closure.

The primary research methodology used for the content of this New York City Guide was Archival Research via the Internet. Citation for all major sources of this guide is listed on the Bibliography page using the Modern Language Association (MLA) format.

The Rikers Island Jail Complex is New York City’s largest jail complex in the state. There are ten separate jails and infirmaries on the island that serve as housing facilities for those in pretrial confinement, pending transfer to another facility or serving sentences less than a year. The complex is identified as a jail complex as it houses inmates serving terms of one year or less, while prisons house inmates serving sentences of more than a year.

The Jail complex is located on Rikers Island and hears the islands name. Rikers Island is a 413.17 acre island located in the East River between The Bronx and Queens Boroughs. Rikers Island is politically apart of the Bronx, however it’s only method of access is the Francis Buono Bridge, which originates in Queens, with the complex holds an East Elmhurst, Queens mailing address. The island is said to be named after a Dutch Settler, Abraham Rycken, who purchased the island in 1664 and was owned by his descendants until its purchase from the city of New York in 1884. The Island was originally less than 100 acres in size but was expanded with the use of prison labor. Prior to the New York City Department of Correction’s establishment of the Jail complexes on Rikers Island, the Island was used as a Union Military training area during the Civil War and is notable for establishing the first three regiments of all African American Army Service Member’s, the 20th, 26th and 31st Infantry Regiments. Following the Civil War, on August 4th 1884, the NYC Commissioner of Charities and Corrections purchased the island from the Rycken family for $180,000 and the Island was briefly used as a Quarantine Facility, a Boy’s Reformatory and a Potters Field, or burial place for paupers and strangers. Eventually Hart Island was converted to a Potters Field and Rikers Island was designated as a Charity Workhouse and Corrections Facility while also being used as a Refuse Landfill for the City. 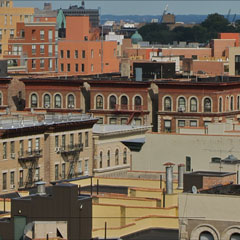 Since the 1920’s New York City’s Harlem community – a few blocks north of Central Park, has served as a residential, cultural and business hub for countless African Americans. Originally a Dutch village formally organized in 1658, it is named after the city of Haarlem in the Netherlands; and to a considerable extent Harlem is not only a community etched with African American vastness, but a place of cultural identity as well.

Harlem is well known for soul-stirring gospel choirs, nourishing southern-style food, throng of street vendors and African markets. Throughout the years, the neighborhood has managed to reinvent itself with a new crop of enterprising and revolutionary leadership, reasonably priced housing accommodations and innovative and tempting tourists fascinations.

The community’s rich history and modern-day leanings have both been defined by a series of economic boom-and-bust cycles, but has managed to largely shaken off the stigma of urban decay. And although Harlem has existed as one of the most celebrated names in black American culture, the trend lines of diversity, identity and cultural expression have been moving for decades. 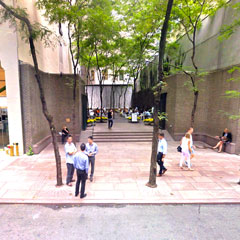 Paley Park is considered one of the “finest urban spaces in the U.S.” by the Project for Public Spaces organization, which is founded on the ideas of sociologist and urbanist William H. Whyte. It is called a “pocket park,” or otherwise a “vest-pocket park,” “parkette,” or “vesty.” The naming conventions reveal that these are beloved spaces, as Paley Park is in particular. The park was given to the public, as a plaque reads, by CBS President William S. Paley and named for his father Samuel. The landowners received no zoning bonuses, nor were they required by law to create a public space. It is simply a gift. 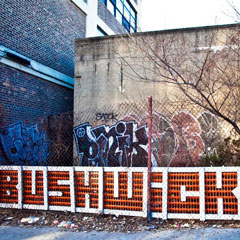 The Arts in a Gentrifying Bushwick

Brooklyn is the most populated borough in New York City with over 2 million residents as of 2014. Over the past several decades, the process of gentrification has been occurring significantly within the borough. With this process comes many economic and demographic changes for residents, and arguably at the forefront of these changes are an influx of artists and other creative types into the area. Historically, it is often artists who are the first to move into an area otherwise deemed undesirable which gives rise to the gentrification process. In Bushwick, Brooklyn, the presence of artists in the neighborhood has made a significant impact, attracting attention from people far and wide. Specifically, new art galleries, performance spaces and street art have contributed to a growing community of the arts in a neighborhood that was previously without it on such a scale. Regardless of the positive and negative attributes of gentrification on a neighborhood, the community of artists is growing rapidly in Bushwick.

Read more about The Arts in a Gentrifying Bushwick 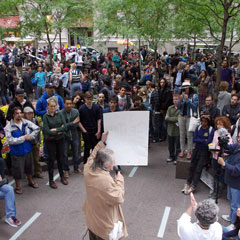 Places of Protesting in the Big Apple

Urban unrest is on the edge between celebrated civic activity and feared revolution. In the whole spectrum of different protests we still can follow that some places in the city are used more for them and some are used less. What are the reasons for some places to be more used in urban demonstrations and for other places less? In some cases they are physical qualities of these places – configuration, size, existence of podiums and stages, acoustics. Parks, plazas, squares and large promenades have been used for demonstrations of many sort. For every demonstration it is always essential that voices of it have been heard. Thus proximity to the government buildings, corporations or other institution in focus of the protest is important aspect. Mass media is helpful to deliver the message, but sometimes, like during Occupy Wall Street movement mass media did not give the support it would do for other activities of its scale. Thus direct contact of the revolution happening in the heart of the Financial District was essential. Other times the regulations existing in the place are important to organize the event. They include rights to express the opinion, rights to use sound amplification devices, rights to gather in groups, openness of the place over night etc. Culture of using space for expression of different emotions might be cultural. It can be forbidden to use open fire, but during grief or religious ceremonies candle lights floods the streets. Traditionally protesting grounds often attract people to maintain the practice alive. In this piece I will address several urban spaces that host protests in diverse levels of participation and representation. I will look at formal protest ground in Union square and its history and spatial qualities that help maintain the tradition. I will look at the qualities of Zuccotti Park in Financial District and question its usage for Occupy Wall Street campaign. And finally last but not least I will look at informal street memorials in the Bronx as protests of oppressed groups.

Read more about Places of Protesting in the Big Apple 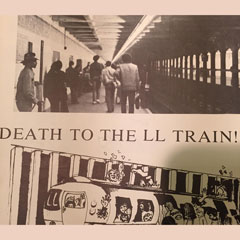 There seem to be few equally hotly contested issues concerning the New York City metropolitan area besides that of housing the renting working and middle classes affordably. This is especially the case within the five boroughs of the city, and of even more significance to longterm Manhattan and Brooklyn residents of gentrifying neighborhoods. Allied with this concern are other issues that dovetail with it: good public schools, accessible, affordable and adequate mass transit, and location of services, like food shopping, that residents can viably partake in.

I plan to focus on a highly visible, yet ironically low key housing development called Stuyvesant Town and Peter Cooper Village, geographically located above the Lower East Side and below Murray Hill. Architecturally undistinguished, yet hewing to a Le Corbusier style of urban planning, this housing estate stands as an example of mid20 th Century urban housing efforts. What is its’ legacy, and its’ prospects for continuing its’ mission in the 21 st Century?

Read more about Housing the Un-Rich