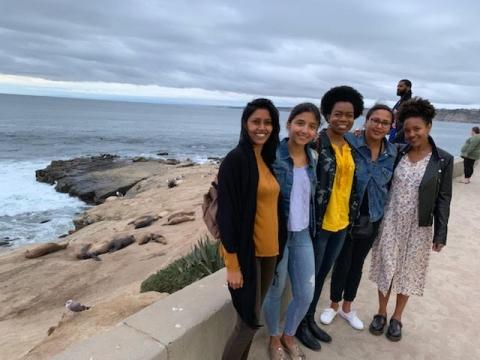 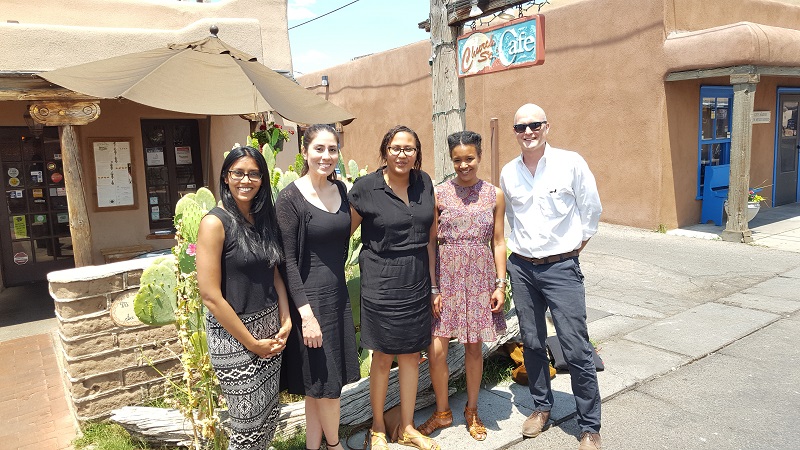 Laís Granemann joined the Clinical Psychology Doctoral Program in 2020. Originally from Brazil, she obtained her master's degree in Social-Organizational Psychology from the University of Brasilia, where she studied the acculturation of Brazilian mothers and fathers raising their children in foreign countries. As a recipient of the Emerging Leaders in the Americas Program scholarship, she worked at the University of Windsor, Canada on a research project on post-migration factors associated with mental and physical health in Syrian refugees. Her career goals include combining research and clinical work to promote culturally sensitive health interventions to refugees, immigrants, and other ethnic minority individuals.

Erzulie Coquillon joined the Clinical Psychology doctoral program in 2019. Her research interests include global mental health, trauma, and the intersections of law and psychology. Prior to Fordham, she completed a master's degree in Counseling Psychology and a J.D. and worked in private sector and non-profit organizations.

Ujunwa Anakwenze entered the Clinical Psychology Doctoral Program in 2018 as a student in the child and family major area of study. Her research and clinical interests include race and culture, global mental health, trauma, bipolar disorder, and interpersonal factors. Ujunwa’s recent projects examine intergenerational transmission of trauma in West African migrants and the role of stigma in generating Black-White disparities in bipolar disorder. Her aim is to become a culturally competent clinician who produces research that promotes the wellbeing of racial/ethnic minorities and other disadvantaged populations.

Michelle Leon joined the Clinical Psychology Doctoral Program in 2018. She is interested in investigating the ethnic and cultural factors that affect immigrants’, refugees’, and other underserved minority groups’ wellbeing. Furthermore, she is interested in investigating cultural concepts of psychological distress, specifically, trauma. Her master’s research explores cross-cultural and cross-national differences in self-reported post-traumatic stress symptoms in individuals from a Mexican sample and a U.S. sample. Prior to Fordham, she worked at NYU’s Department of Population Health on an RCT investigation of a technology-based medication adherence intervention for low-income individuals in New York City. Her career goals include promoting cultural competence in psychological assessment and intervention through research and hopes to work with vulnerable, underserved, and marginalized trauma-affected families.

Aïcha Cissé entered the Clinical Psychology doctoral program in 2016. She is interested in social and cultural factors that affect mental health and well being among immigrant and ethnic minority populations, especially at-risk youths and their families. Her master's thesis research project is a qualitative study of parent-child acculturation dissonance among West African immigrant families. Aïcha's theoretical orientation in psychotherapy is eclectic, leaning towards humanistic and integrative approaches. One of her main goals as a scholar and future clinician is to promote social justice and cultural sensitivity in psychology research and practice.

Sagal Ahmed entered the Clinical Psychology doctoral program in 2015. Her research interests include immigrant wellbeing, cultural factors impacting the expression of distress and global mental health. Her master’s thesis examined changes in social status in West African immigrants across migration and their impact on post-migration wellbeing. Currently, she is working on a project in the Somali Region of Ethiopia exploring the connection between khat use, psychotic symptoms and treatment adherence.

Candace Mootoo entered the Clinical Psychology doctoral program in 2014. Her research interests relate to race, culture, youth, and applications to social issues. Recent work includes involvement in a meta-analysis of the role of ethnic identity in the relationship between discrimination and well-being and using social network analysis to understand the relationships between trauma, stressors, and distress in a Sri Lankan war-affected population. Prior to Fordham, she completed her M.A. in developmental psychology at Teachers College, Columbia University and worked at the NYU Child & Family Policy Center on a randomized-controlled trial investigation of a home-visitation intervention for low-income families in New York City.