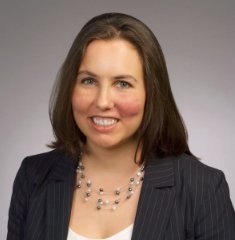 Courtney Cox is an Associate Professor at Fordham University School of Law. She writes at the intersection of intellectual property and philosophy, with an emphasis on technology, time, and risk. Her current project focuses on the use of misrepresentations to mitigate trade secret loss.

Courtney attended the University of Chicago Law School as a Rubenstein Scholar and graduated with highest honors. She holds a BPhil (with distinction) and DPhil in philosophy from the University of Oxford. She received her BA, magna cum laude with distinction, from Yale University, where she studied both Engineering Sciences (Electrical) and Ethics, Politics, & Economics. Before joining the faculty in 2019, Courtney was an intellectual property litigator at Ropes & Gray LLP, and clerked for then-Chief Judge Sandra L. Lynch of the U.S. Court of Appeals for the First Circuit. She previously taught philosophy as a lecturer at Oxford’s Hertford College and served as a Yale Fox Fellow at Fudan University in Shanghai.