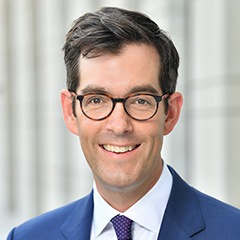 John Brooks joined Fordham as a Visiting Professor in 2020 and will join the full-time faculty in September 2022.  Brooks’s research focuses on tax law, public finance, social insurance, and related issues in federal fiscal and budget policy. In addition to contributing to tax and fiscal theory generally, Brooks also focuses on “tax-adjacent” areas of fiscal policy, especially the federal student loan program, and his work seeks to better understand the array of government fiscal tools beyond classic taxing and spending. His work has appeared in the Georgetown Law Journal, the Tax Law Review, the North Carolina Law Review, the Journal of Legal Education, and elsewhere, and he has also written for the New York Times and the L.A. Times. He is currently working on a book on American "hidden" social welfare spending, under contract with Yale University Press. He consults regularly on both tax and student loan topics with legislators, lawyers, and advocates.

Prior to joining Fordham, Professor Brooks spent 10 years on the faculty of Georgetown University Law Center. Before that, he was a Climenko Fellow and Lecturer on Law at Harvard Law School, an Associate in the tax department of Ropes & Gray in Boston, and a clerk for Judge Norhan H. Stahl of the U.S. Court of Appeals for the First Circuit.

Professor Brooks earned an A.B. from Harvard College and a J.D. from Harvard Law School, where he was an Olin Fellow in Law & Economics and was awarded the Sidney I. Roberts prize for the best paper on taxation.