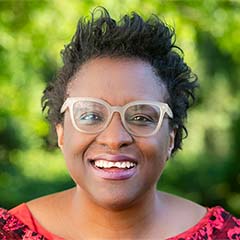 Eleanor Brown, a leading scholar of property, migration, globalization, development, and race and the law, will join the Fordham Law faculty in the Spring. She will teach Property Law.

Brown is currently a Professor of Law and International Affairs at the Pennsylvania State University (University Park campus), as well as a fellow at the Rock Ethics Institute.  She is a member of the Board of Advisors of the Africana Research Center and an Advisor in the Schreyer Honors College. She was also the founding faculty advisor for the Black Students Association in the School of International Affairs.  In recognition of her activism and allyship for marginalized identities, both within and outside academia, Brown was named one of the first recipients of the Ona Judge Award for Human Rights by the Human Rights Society, a joint student organization at Penn State Law and the School of International Affairs.

Brown’s scholarship has been published in the Yale Law Journal, California Law Review, the University of Chicago Law Review, the Michigan Law Review and the New York University Law Review, among many others. She has also published with The New Republic, The New York Times, and the Los Angeles Times and has been a commentator on NPR. Among Brown’s academic accolades, her paper “The Blacks Who ‘Got’ Their 40 Acres” was one of two papers selected in the property category for the Yale/Harvard/Stanford Junior Faculty Forum.

Brown holds a bachelor’s degree in molecular biology from Brown University and a master’s degree in politics from Oxford University, where she was Rhodes Scholar. She earned her juris doctor in 1999 from the Yale Law School and served as a clerk for the Honorable Patricia Wald of the U.S. Court of Appeals for the District of Columbia and the Honorable Keith Ellison of the U.S. District Court for the Southern District of Texas.

Brown was appointed by The Most Honorable Andrew Holness, the Prime Minister of Jamaica, to the Jamaican Education Transformation Commission. She was also appointed to and served on the CARICOM Commission. She has served on the boards of several publicly traded Caribbean companies, and was the youngest director of two subsidiaries of the Bank of Nova Scotia (Jamaica), one of the largest subsidiaries of the largest Canadian bank (by market capitalization). Brown chaired the Conduct Review Committee of the Board for Scotia Jamaica Investment Management. She was a member of the Sugar Enterprise Team, the entity appointed by the Jamaican Cabinet to oversee private sector participation in the Jamaican sugar sector.

Brown was previously the youngest director of JPSCo, the electric utility owned by Korea East West Power, Marubeni Corp. of Japan, and the government of Jamaica. She chaired the Pension Fund Subcommittee of the board. She was also a member of the board appointed by the chancellor charged with septennial review of the operations of the University of Technology in Jamaica. Brown was also an external board member of Caribiz, an association of Caribbean alumnae and students of Harvard Business School and the Wharton School of the University of Pennsylvania, formed to promote capital market development in the Caribbean. Brown is also active in the Anglican (Episcopalian) faith community.