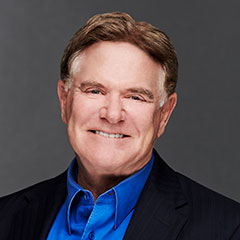 Joe Moglia is former CEO and chairman of TD Ameritrade, chairman of Fundamental Global Investors and Capital Wealth Advisors, chairman of FG New America Acquisition Corp., and chair of athletics and executive advisor to the president at Coastal Carolina University.

Moglia worked at Merrill Lynch for 17 years, where he was on the executive committees for both the Institutional and Retail businesses. Since 2001, he has been either CEO or chairman of TD Ameritrade but stepped down in 2020 when they were acquired by Charles Schwab. The combined company is worth $90 billion, with client assets of $6.5 trillion; when Moglia arrived, these numbers were $700 million and $24 billion.

Moglia coached football for 16 years, had a business career of 24, and then went back to football for another nine years. In the last 11 years, he has been a part of eight championship teams, and as a head coach has a winning percentage of .718.

His many honors include the Eddie Robinson National Coach of the Year Award, the Vince Lombardi Award, induction into seven Halls of Fame, and three honorary doctorates, including one from Fordham.