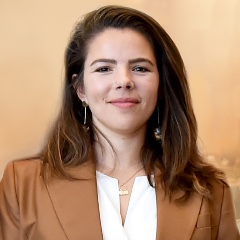 Vanessa A. Nadal is an attorney and trained chemical engineer. She is adjunct faculty at Fordham University School of Law and is working on a publication about cosmetic law with the Fashion Law Institute. She has experience and interest in cosmetics health, environmental, and intellectual property law.

After earning her undergraduate in chemical engineering at MIT, Ms. Nadal began her professional career as an anti-aging research and development scientist at Johnson & Johnson Consumer Products Company. There she conducted scientific research and developed innovative technology for skincare products through clinical proof-of-principle studies. Drawing on her critical thinking skills and a desire to effect change in other areas of interest, Ms. Nadal turned her sights to law.

Upon completing her JD at Fordham, Ms. Nadal joined Jones Day where she handled disputes in federal courts, New York state courts and ICC arbitrations. She has handled matters in a variety of subjects, including health, intellectual property, immigration, family, and contract law, the Fair Credit Reporting Act, and the False Claims Act. After leaving Jones Day, during a brief relocation in London, England, Ms. Nadal was a consultant for the Climate Science Legal Defense Fund.

Ms. Nadal is the co-creator and co-professor of Fordham Law’s first Cosmetics Regulation course, launched in 2019. The course covers the governmental, industrial and societal regulation of cosmetics and cosmetic drugs. Ms. Nadal returns to co-teach this course in 2020.