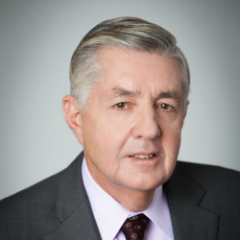 James W. Quinn, one of the most accomplished trial lawyers in the U.S., is the former head of Weil’s Litigation Department and a senior partner in Weil’s Litigation practice, where he specializes in high-stakes commercial disputes, with particular emphasis on antitrust, securities, false advertising, sports, entertainment, patent, and related complex intellectual property litigation. Known for his judgment, thorough preparation, and mastery of detail, Mr. Quinn is able to take command of the courtroom with penetrating cross-examination of witnesses and logically compelling arguments. Clients call upon him in matters that are high-profile, high-stakes, and often international in scope.

Some of Mr. Quinn’s most notable engagements include obtaining for CBS the dismissal with prejudice of a landmark putative class action in which current and former NCAA Division I college football and basketball players alleged that CBS, along with a host of college athletic conferences, other networks, and licensors, profited from the broadcast and use of those Student-Athletes’ names, likenesses, and images without permission; winning for CBS Corporation the dismissal, affirmed on appeal, of a putative securities fraud class action relating to a $14 billion impairment; obtaining a complete dismissal for ESPN, Inc. and certain Walt Disney Co. companies in a $130 million suit brought by Echostar concerning alleged contract breaches relating to rights to ESPN and Disney’s high-definition television networks; securing a complete dismissal for CBS Corporation in a $70 million breach of contract, fraud, and breach of fiduciary duty suit filed by its former anchorman and correspondent Dan Rather stemming from his departure from the network in 2006; on behalf of ExxonMobil, defeating class certification of a purported national class alleging that major petroleum companies conspired to restrict the supply of gasoline; and securing summary judgment for ESPN, Inc. in litigation against boxing promoter Don King who alleged defamation and false light invasion of privacy and sought $2.5 billion in damages.

In another recent and high-profile matter, he served as lead trial counsel for ExxonMobil during a three-month trial in New Hampshire state court of claims brought by the State of New Hampshire relating to the use of the chemical MTBE as a gasoline additive. Earlier, he served as co-lead counsel for Vivendi in In re Vivendi Universal, S.A. Securities Litigation, the largest shareholder class action ever to go to trial.

Additionally, Mr. Quinn has earned a reputation with his clients for his unmatched experience in sports and entertainment litigation. He is the most successful and influential litigator of sports antitrust cases in the quarter-century that these cases have been played out in the national arena. He is known for his strategic personal assessment of each client and his keen execution of the facts in the courtroom. Mr. Quinn has counseled and represented players associations in Major League Baseball, the National Football League, the National Basketball Association, the National Hockey League and Major League Soccer.

Chambers USA has ranked Mr. Quinn as a leader in nationwide sports law and New York commercial litigation since 2005, and as a top U.S. trial attorney since 2010. In 2013, he received the Chambers USA “Award for Excellence” in the category of “Litigation: Business Trial Lawyer” after being shortlisted for the award since 2009; he subsequently has been named to the shortlist for the inaugural, 2014 edition of “The Chambers 100,” a list of the top 100 business lawyers in the United States. Additionally, he has been ranked as a leading trial lawyer by Chambers Global in 2004/2005 and 2009-2016, with client commentators describing him as “one of the greatest trial lawyers in the country.”

Mr. Quinn is a Fellow of the International Academy of Trial Lawyers and the American College of Trial Lawyers and a member of the International Society of Barristers. He is also a Fellow of The New York Bar Foundation. He has chaired a variety of committees of both The American Bar Association and The Bar Association of The City of New York. He is a member of the Advisory Board of The National Judicial College and the Panel of Distinguished Neutrals of the Center for Public Resources. Mr. Quinn serves as a Board Member of the American Diabetes Association, the Landmark Foundation, and The Respect for Law Alliance, among many others.