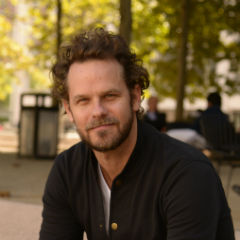 John C. Seitz joined the Theology Department in 2008 after receiving his PhD in American Religions from the Committee on the Study of Religion at Harvard University.

His research focuses on the historical and ethnographic study of U.S. Catholics and on theoretical questions in the study of religion. Recent projects consider U.S. Catholics and devotional objects in World War II, life in a Roman Catholic seminary in the 1960s, and ethnography and psychoanalysis in the study of religion. His work has appeared in Church History, American Catholic Studies, U.S. Catholic Historian, and Method and Theory in the Study of Religion. Reviews and popular articles have appeared in Theological Studies, National Catholic Reporter, and Commonweal, among others.

In 2011 Seitz published No Closure: Catholic Practice and Boston’s Parish Shutdowns (Harvard Univ. Press). The book seeks to explain the anxieties and upheaval around a recent wave of church closings in Boston. The closings threw Catholics into uneasy reengagement with the meanings of sacrifice and sacred presence as these have changed since the 1960s. The shutdowns, which are not limited to the Boston Archdiocese, also provoked reflection on the meanings of home, community, and belonging in post-war America.

In general, Seitz’s work springs from an interest in the ways the study of religion, and in particular the study of Catholics, enhances our ability to understand the American past and present. He is particularly interested in religious practice—everyday encounters at the intersection of religious tradition and improvisation—as it sheds light on social and emotional histories. A second book project, about Roman Catholic priests in the U.S., extends these methodological interests.

In his teaching Seitz treats U.S. religious history, theories in the study of religion and theology, and the history of Christianity in the modern period. Among his courses are “American Religious Texts” and “Faith & Critical Reason,” both of which contribute to the undergraduate core curriculum. Electives and courses for the major have included “Christian Thought and Practice III,” “Wartime Religion in U.S. History,” “Contemporary Conversations in Theology,” “Home, Away, and In-Between,” and “Catholic Studies Seminar II.” Seitz also teaches “Readings in American Religion” and “History of Christianity II” for the graduate program in Theology.

Beyond the department, Seitz has been involved in a variety of projects. He has served as a Young Scholar in American Religion through the Center for the Study of Religion and American Culture at IUPUI. From 2012-2015 he was a Project Fellow for the Lived History of Vatican II project at Notre Dame’s Cushwa Center for the Study of American Catholicism. In 2020, he was named a research fellow for two projects considering the history and legacy of clerical sex abuse. In addition to his role in the Theology Department, Seitz serves as the Associate Director for Lincoln Center of the Francis and Ann Curran Center for American Catholic Studies at Fordham. He also edits a book series, Catholic Practice in North America, for Fordham University Press and co-chairs the Roman Cathoilc Studies Unit of the American Academy of Religion.

American religions, U.S. Catholicism, theory and method in the study of religion

“Secrecy, Sex Abuse, and the Practice of Priesthood,” in The Handbook of Religion and Secrecy ed. Paul Johnson and Hugh Urban (in preparation, Routledge Press).

Working Alternatives: American and Catholic Experiments in Work and Economy

“Priests as Persons: An Emotional History of St. John’s Seminary, Boston, in the Era of the Council” in Catholics in the Vatican II Era: Local Histories of a Global Event ed.  Kathleen Sprows Cummings, Timothy Matovina, and Robert A. Orsi (Cambridge University Press, 2017).

“The Mass Clock and the Spy: The Catholicization of the Second World War” Church History: Studies in Christianity and Culture, 83:4 (December 2014), 924-956.

"Placeholders: Catholic Tradition and Faith to the Parish," Commonweal, September 2, 2013.