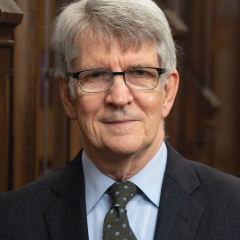 Brad Hinze was introduced to theology through the writings of Thomas Aquinas, Western mystical theology, and later the theology of Bernard Lonergan, Edward Schillebeeckx, and Karl Rahner. He studied hermeneutics and critical theories with David Tracy and Paul Ricoeur. Under the direction of Brian Gerrish, he continued his studies of disputed doctrinal issues and theories of doctrinal development, which he pursued in his first book, Narrating History, Developing Doctrine: Friedrich Schleiermacher and Johann Sebastian Drey (1993).

After graduate school, Hinze concentrated on contentious issues in hermeneutics, critical theory, and the role of praxis among proponents of contrasting theological methods. These interests gave rise to a research project dedicated to describing and analyzing the use of dialogical methods of communal discernment in the church in the aftermath of the Vatican II. The findings, Practices of Dialogue in the Roman Catholic Church: Aims and Obstacles, Lessons and Laments (2006), worked at the intersection of systematic theology, historical inquiry, and practical theology.

His 2016 book, Prophetic Obedience: Ecclesiology for a Dialogical Church, retrieves and advances a theology of the prophetic people of God. This project explores the people of God ecclesiology and the impact of the prophetic office of Christ during Vatican II and their eclipse occasioned by the ascendance of communion ecclesiology. This book offers a constructive argument about prophetic discipleship and mission of the church. Special attention is given to the role of lamentations in prophetic discourse and the particular summons to prophetic obedience in response to the human aspirations and laments in the church and society. This prophetic style of discipleship and mission advances forms of synodality in the local church and grassroots democracy in civil society with people of other faiths and worldviews.

Hinze has served as president of the International Network of Societies for Catholic Theology, the College Theology Society, and the Catholic Theological Society of America.

Hinze’s current research focuses on the role of conflict, dissent, and reclaiming the giftedness of precarious lives in agonistic practices of synodality and democracy. This work converges with a resurgence in attention to the local people of God and the sense of the faithful, especially in light of issues pertaining to transgenerational poverty, racism, and colonialism, and the advancement of economic democracy.

Practices of Dialogue in the Roman Catholic Church: Aims and Obstacles, Lessons and Laments.  2006

Learning from All the Faithful: A Contemporary Theology of the Sensus Fidei,

Beyond Dogmatism and Innocence: Hermeneutics, Critique, and Catholic Theology,

“Can We Find A Way Together? The Challenge of Synodality in a Wounded and Wounding Church,” Irish Theological Quarterly, 85 (2020).