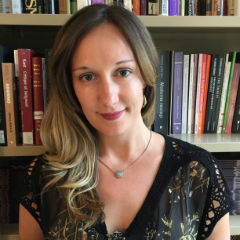 A Minnesotan by birth, but a Tar Heel at heart, Dr. Reklis attended the University of North Carolina at Chapel Hill as a Morehead Scholar (now Morehead-Cain Scholar), earning a BA in English Literature and Creative Writing. This course of study, coupled with extracurricular work as a documentary photographer and director of an international student aid non-profit, inspired a love for the stories that bind peoples lives together and a passion to render those stories, and the circumstances that give them life, with attention to detail and care for the ordinary, which she later brought to the study of religion and theology at Yale University. She came to Fordham after spending three years (while she was also finishing her doctorate) as Director of Theological Initiatives and Senior Advisor to the President at Union Theological Seminary in the City of New York, which taught her more than she bargained for about the nuts and bolts of higher education, but also reaffirmed her commitment to serving in a university context. She is an avid TV watcher and is always happy to take and share suggestions on what is worth watching next. She lives in Astoria, Queens, with her husband, an English professor, their train-loving son and toddler daughter.

Dr. Reklis is interested in the conditions of possibility that make theological belief and practice possible at any given moment. This means that she examines the historical context, material conditions, intellectual histories, personal relationships, affective states, and networks of exchange and power that contribute to different ways of being Christian at different times and places. She spends most of her time thinking about Protestants and especially Calvinists from the 18th- 20th century, but she is also interested in what theology does in the world today and how it does it. Her first book-length project, Theology and the Kinesthetic Imagination: Jonathan Edwards and the Making of Modernity (Oxford University Press, 2014), examines Jonathan Edwardss contribution to the public debates around the ecstatic and excessive bodily performances of 18th century religious revivals as a way of tracing an alternative modern subjectivity to the one being forged in the confluence of early global capitalism and early Enlightenment rationalism. Situating Edwards in conversation with discourses about the making of modernity in the 18th century also relocates North American Reformed theology in its circum-Atlantic context, a context that describes the exchange of goods and ideas in circulation from Europe, Africa, the Caribbean and the Americas that created the material conditions for modernity.

A second project building on the first explores how and why Protestant theologians in late modernity (20th century to the present) turn to aesthetics (beauty), bodily experience, and desire (erotics) as a means of reviving theological discourse, or saving (mostly academic) theology from its own uneasy collusion with the projects of modernity. In particular, the project examines the friendships between liberal Protestant theologians, devoted church laity, and architects of high modernist visual culture in New York City in the mid-century around the founding of the Society for Art, Religion, and Contemporary Culture.

Her interest in conditions of theological possibility come together in several extracurricular projects. She is a Research Fellow for the New Media Project at Union Theological Seminary, where she blogs regularly on theology, religious practice, and new media use and with whom she is orchestrating on a teaching program on new media and theology at Fordham. She is Co-Director of the Institute for Art, Religion and Social Justice, which she co-founded in 2009 with artist AA Bronson. And she is a regular contributor to the On Media column for The Christian Century.

Theology and the Kinesthetic Imagination: Jonathan Edwards and the Making of Modernity (Oxford University Press, 2014)