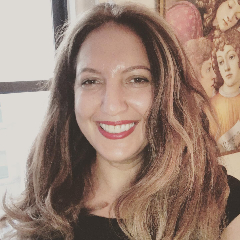 Sarah Eltantawi joined Fordham’s Theology Faculty in 2020.  She is a specialist in contemporary Islam and Islamic law, with a focus in authoritarian and post-colonial contexts.   Professor Eltantawi holds a PhD from Harvard University in the Study of Religion (Islamic studies), where she was the Jennifer W. Oppenheimer Fellow, an MA from Harvard University in International Studies (Middle East), and a BA from the University of California, Berkeley in Rhetoric and English literature.

Professor Eltantawi’s book Shari’ah on Trial: Northern Nigeria’s Islamic Revolution (University of California Press, 2017) examines why Northern Nigerians took to the streets starting in 1999 to demand the re-impimentation of shari’ah law.  Her book focuses on the career of the stoning punishment in Islam, centered on the famous case of Amina Lawal, who was sentenced to death by stoning at the turn of this century for committing adultery (and ultimately acquitted). Professor Eltantawi is currently at work on two projects: one that examines the political theology of the Muslim Brotherhood in Egypt, and another, a book of essays that looks at several issues in Contemporary Islam, especially in the United States, most of which concentrate on problems attending the question of Islamic reform.

Professor Eltantawi has held fellowships at the Center for Public Leadership at the John F. Kennedy School of Government at Harvard University, at Brandeis University as a Scholar in Residence in Religion, Gender, Culture and the Law, at the University of California, Berkeley, as the Sultan Fellow in Arab Studies, and at the Forum Transregionalle at the Wissenschaftskoleg in Berlin as well as the Freie Universität in Berlin. She is also a political analyst, columnist, and radio show host.

Ṭūsī Did Not " Opt Out " : Shiite Jurisprudence and the Solidification of the Stoning Punishment in the Islamic Legal Tradition

Between Strict Constructionist Shariah and Protecting Young Girls in Nigeria: The Case of Child Marriage (ijbār)

Normativity in Islamic Studies What Does " Modernity " and " Postmodernity " Mean to Northern Nigerians?

"Is Democracy the Question?"