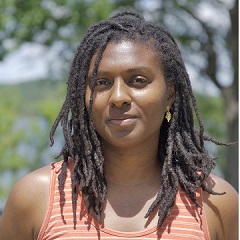 Laurie R. Lambert is an interdisciplinary scholar, working at the intersection of literature and history in African Diaspora Studies. She is an associate professor of African and African American Studies at Fordham University. Her first book, Comrade Sister: Caribbean Feminist Revisions of the Grenada Revolution (University of Virginia Press, 2020), examines the gendered implications of political trauma in literature on Grenada. The book analyzes how Caribbean women writers use authorship as a means of expressing cultural sovereignty and critiquing the inadequacy of hierarchical, patriarchal, and linear histories of a black radical tradition as they narrate the Grenada Revolution. In so doing, Lambert reads Caribbean literature as a primary site for the excavation of gendered readings of revolution, identifying the marginalized voices of women and girls at multiple unexpected sites of political formation.

Lambert received her BFA in Film Studies from Ryerson University in Toronto, Canada, as well as an MA in English from the University of Toronto. In 2013 she completed her PhD in English and American Literature at New York University. Her research and teaching interests include Black Feminism, Black Radicalism, Caribbean and African Diasporic Literature and History, Black Performance Studies and Freedom and Slavery Studies. She is currently the Secretary of the Association for the Study of the Worldwide African Diaspora (ASWAD). Before joining the faculty at Fordham, Lambert was Assistant Professor of African American and African Studies at the University of California, Davis, and the 2014-2015 Postdoctoral Fellow in Critical Caribbean Studies at Rutgers University in New Brunswick, NJ.