Ask fundamental questions about the nature of reality—and learn to think. 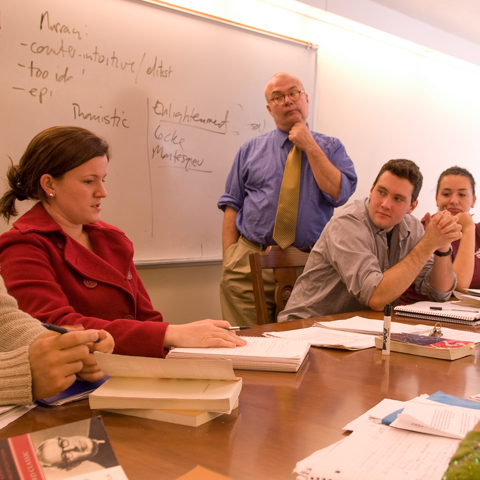 Philosophy holds a special role in Fordham's liberal arts tradition. With a long and distinguished history going back more than 150 years, the philosophy major combines intense academic rigor with profound reflection on the nature of reality and human existence. We train you in the depth of thought you need to pursue an enlightened life of responsible leadership and service.

We acquaint you with the intellectual and moral traditions of civilization to help you think clearly and carefully for yourself. Our course of study is pluralistic and broad-minded, and taught by faculty internationally recognized for their scholarship. You’ll explore a wide variety of schools of thought, including contemporary philosophy (American, analytic, continental, environmental, feminist, Thomistic) as well as epistemology, ethics, metaphysics, philosophy of mind, and philosophy of religion.

You will question assumptions and critique principles. You’ll see logic as a practice, analyze abstract conceptual relationships, and interpret difficult texts. And you’ll develop the analytical, critical, and argumentative skills that employers and graduate schools in many fields seek in their future leaders. Example: a philosophy degree is one of the best preparations for law school.

As a philosophy major, you take 10 classes covering a range of eras, traditions, and topics, including:

Our five-year early admission MA program allows philosophy majors to attain both a bachelor’s degree and a master’s degree in philosophy in five years.

We sponsor an annual lecture series that brings distinguished philosophers from around the world to campus.

We have a chapter of Phi Sigma Tau, the national honor society in philosophy.

Intellectual exchange and collaboration are at the heart of philosophical inquiry. That’s why we host or participate in a range of workshops and reading groups where scholars and students delve into different philosophical traditions:

Study abroad enriches you academically, culturally, and personally. There is a globe of possibilities available through Fordham’s International and Study Abroad Program.

The major in philosophy is an excellent preparation for graduate schools and careers that call for superior critical thinking, writing, and research skills, including:

Get a job, right? Yes, but you want more: a career. Our career services tap Fordham’s ties with more than 2,600 companies. We offer:

You also get access to our powerful (and Fordham-loyal) alumni network, who want to see you succeed as they have.

Learn More About the Philosophy Degree