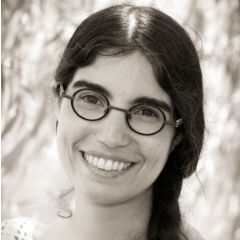 Sarit received her AB and PhD in Religion and Jewish Studies from Princeton University. She studied Talmud and archaeology at the Hebrew University in Jerusalem as a Fulbright Fellow, learned Arabic at Middlebury College, held post-doctoral fellowships at the Jewish Theological Seminary and Harvard University, and taught at the University of Toronto and Andover Newton Theological School. She spent the 2017-2018 academic year as a fellow at the Institute for Advanced Study in Jerusalem, where she participated in research groups on ancient time-keeping as well as on late antique conceptions of the self.

Sarit Kattan Gribetz studies the history of Jews and Christians in antiquity, with a focus on rabbinic literature. Her first book, titled Time and Difference in Rabbinic Judaism (under contract with Princeton University Press), examines the ways in which time was conceptualized and employed in ancient Jewish texts to create and disrupt difference – between rabbis and Romans, Jews and Christians, men and women, heaven and earth. Sarit has published articles about other aspects of time in antiquity, including the use of women’s bodies as metaphors for time; the correspondence between Philo and Seneca’s philosophical approaches to quotidian time; and about the recent “temporal turn” in the fields of Ancient Judaism and Jewish Studies.

Sarit is currently working on her second book, Jerusalem: A Feminist History.  The history of Jerusalem is usually told as a story about King David, Emperor Constantine, and Sultan Salah ad-Din – that is, as a history of a city that was founded, built, and ruled by powerful men.  Throughout its history, from antiquity through the medieval and modern periods, however, the city of Jerusalem has also been ruled by women; built by women; mourned by women; populated by women; and visited by women.  Jerusalem’s historical women were key agents literarily, theologically, architecturally, and politically.  Moreover, Jerusalem is often personified as a woman and depicted in feminine terms.  In this book, she argues that it is not only possible but also important to tell a feminist history of Jerusalem that places at its center the contributions of women to the city’s development.  This project is therefore part of a larger historiographical effort to repopulate the histories we write and the stories we tell with those – women, children, enslaved people, and non-elites – who were there and who played important roles, but who were left out of the narrative because of their gender, sexuality, class, race, ethnicity, and other aspects of their identities and relative powerlessness.

Sarit also publishes about a set of satirical texts from the medieval period called Toledot Yeshu, which tell the story of Jesus’ life from a Jewish (and anti-Christian) perspective. In her continuing work on this corpus, she is interested in the use of parody in religious polemic, the literary and cultural consequences of interreligious tension, the dynamic between oral and written transmission, the portrayal of motherhood, and the history of Jewish representations of Christianity.

Sarit also writes about the intersection of gender and ancient textual transmission in Jewish and Christian antiquity, asking which texts might have been read by women in antiquity, and how our readings of these texts change when we imagine women as part of the intended (or actual) audiences or transmitters of such traditions. This project has led her to think more carefully about the use of “imagination” in our reconstructions of antiquity – what we allow ourselves to imagine and what we don’t, and how imagination might be responsibly harnessed for historical ends.

Sarit is also a Core Faculty Member at the Drisha Institute for Jewish Education, and she teaches and lectures regularly beyond the academy.

“The Talmud in Korea: A Study in the Reception of Rabbinic Literature,” Association for Jewish Studies Review (2018, forthcoming), co-authored with Claire Kim.

“‘Lead Me Forth in Peace’: The Wayfarer’s Prayer and Rabbinic Rituals of Travel in the Roman World,” in Journeys in the Roman East: Imagined and Real (ed. Maren Niehoff; Tübingen: Mohr Siebeck, 2017), 297-327.

“Jesus and the Clay Birds: Reading Toledot Yeshu in Light of the Infancy Gospels,” in Envisioning Judaism: Studies in Honor of Peter Schäfer on the Occasion of his Seventieth Birthday (ed. Ra'anan Boustan, Klaus Hermann, Reimund Leicht, Annette Yoshiko Reed, and Giuseppe Veltri, with the collaboration of Alex Ramos; Tübingen: Mohr Siebeck, 2013), 1021-1048.