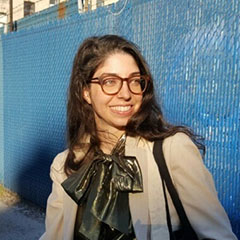 Nina Vartanian is a New York-based costume designer whose work spans film, print, theater, opera, and dance. Most recently, she designed the film UNSILENT directed by Alex Harvey and produced by the Historic Hudson Valley, which will run during their Sleepy Hollow festival for the next seven years. She designed the Pulitzer nominated chamber opera, ISPA DIXIT, directed by Ashley Tata. The opera premiered at EMPAC and received a limited tour. Nina received a BFA in fashion design from Parson’s The New School of Design and an MFA in costume design from NYU Tisch School of the Arts.