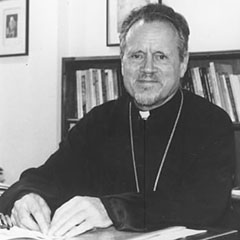 Fordham University has had a long and vibrant relationship with Orthodox Christian communities. The internationally renowned Orthodox theologian and historian, The Very Rev. John Meyendorff, was a Professor of Byzantine History at Fordham from 1967 to 1992, and for generations, Orthodox families have chosen Fordham as the school where students pursue a rigorous education that respects and encourages a deeper understanding of Christianity.

In 2004, Fordham presented the inaugural Annual Orthodoxy in America Lecture featuring His Eminence Archbishop Demetrios of America. Orthodox Christian Studies was launched as an academic program in 2007 when the interdisciplinary minor was established. In 2009, His All Holiness, Bartholomew, Archbishop of Constantinople, New Rome and Ecumenical Patriarch visited Fordham University and was awarded an honorary degree. The Orthodox Christian Studies Center was officially founded by Professors George E. Demacopoulos and Aristotle Papanikolaou in 2012.

Today, the Center supports a multitude of research initiatives, publications, lectures, and a thriving undergraduate minor in Orthodox Christian Studies. Over the years, the Center has grown through generous individual and foundation support, including significant awards from the National Endowment for the Humanities, the Patterson Family Foundation, the Jaharis Family Foundation, the Henry Luce Foundation, the British Council, the Nicholas J. and Anna K. Bouras Foundation, and Leadership 100, among others.