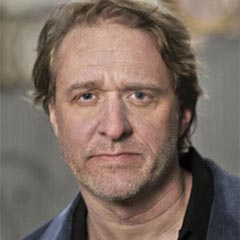 Mark Greenfield is the founding Artistic Director of The Faux-Real Theatre Company (FRTC) with whom he has created such shows as Funbox, William Shakespeare’s Haunted House, Igloo Tales and Htebcam (Macbeth in Reverse). Other work with FRTC includes co-directing Carrie DuBois’ adaptation of The Tinderbox with Constance Tarbox.

Most recently, Mark’s original play IE – In Other Words was produced at the Flea Theater. In addition to his work with FRTC, Mark has directed and acted for Gorilla Rep. Other acting credits include playing Arlecchino for four years with the Italian commedia dell’ arte troupe, I Giullari Di Piazza, with whom he performed at Lincoln Center, and St. John the Divine. He was also an artist in residence at the Caramoor Classical Music Center. Mark played the role of Yankl in Caraid O’Brien’s translation of God of Vengeance (directed by Aaron Beale) and appeared in O’Brien and Beale’s production of Motke Thief. Mark has toured with IMAGO, The Shoestring Players, and Ralph Lee and the Mettawee River Theatre Company, and The Theater for a New City. He trained in Poland with Theatre Gardzienice.

He can be seen in an upcoming film from renowned Iranian film director, Amir Nader.