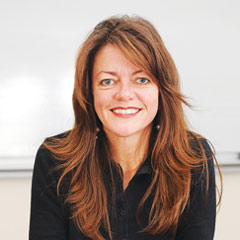 PhD in Political from University of California, Los Angeles

Monika McDermott is Professor of Political Science at Fordham. She studies voting behavior, political psychology and public opinion. Prof. McDermott has published research on multiple topics within political behavior, including personalities in politics, voting cues, information shortcuts in elections, public opinion of Congress, and vote choice in congressional elections. She is the author of two books, and her work has been published in some of the profession's topjournals, including the American Journal of Political Science, the Journal of Politics, Political Research Quarterly, and Public Opinion Quarterly.

Prof. McDermott is also a survey research practitioner, having conducted election surveys at The Los Angeles Times Poll and the CBS News Election and Survey Unit. She has been an election night polling analyst for CBS News since 2002 and also works as a campaign and polling consultant for political and non-profit clients in America and abroad.

2015. “Walking the Walk but Not Talking the Talk: Public Reactions to Hypocrisy in Political Scandal.” American Politics Research 43(6): 952-974 (with Douglas Schwartz and Sebastian Vallejo).