Find out why our clinical program is ranked #17 nationally. And then discover why that ranking only vaguely approximates the true value of your clinical experience.

Tax Clinic Students (from left to right): Pearse Walsh '23, Daniel McAuliffe '23, and Daobo Wang '23 get ready to call the client to update him with the good news.

The aggressive sales practices of a large bank resulted in the IRS claiming the Federal Tax Clinic's client owed more then $17,000 in unpaid taxes, penalties and interest.  The reality was that he owed nothing in taxes, which the IRS attorneys only conceded after the three Tax Clinic students pictured above submitted a demand letter arguing that the bank was wrong and that the client did not have any unreported income.

Nearly six years after suffering a workplace injury, the Tax Clinic's client received $50,000 in worker's compensation, which is generally not subject to income tax. He wanted to safeguard the money in a savings account, but the bank -- without the client's permission -- opened an annuity plan instead. When the client learned his money was unavailable because it was tied up in a 25 year annuity, he filed a a complaint, and the bank reluctantly issued a $50,000 refund. Two years later, he received a notice from the IRS claiming he failed to report the funds in retirement income.  The bank claimed that the refund of the workman's comp funds they had issued was subject to income taxes.

Under the direction of Prof. Elizabeth Maresca, and in advance of the December trial date, the student team researched the issue and -- relying on statutes regulations and case law -- drafted a demand letter arguing that the client would prevail on a motion for summary judgment.  The IRS conceded the matter, agreeing that the client did not owes any taxes or penalties.

Careless mistakes by large institutions -- in this case by a large bank and the IRS (which relied on the bank's reporting, not the individual's) demonstrates the negative effects on individual taxpayers in addition to money, such as confusion, stress and anxiety. This is especially true for low-income tax payers who often face bills that can surpass their yearly income. By participating in this Clinic, the students learned first hand the issues that can arise causing those who lack access to good lawyers to end up paying money they do not owe. 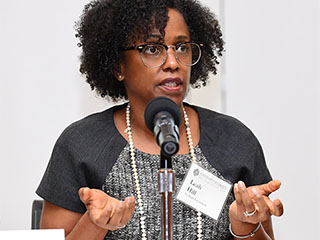 NEW Family Defense and Advocacy Clinic joins a growing movement to examine, expose and reform the system of government intervention in the lives of Black and Brown families.

The Family Defense Clinic, directed by Leah Hill, is a partnership between Fordham's clinical program and the Center for Family Representation ("CFR").  The Center is a holistic, multi-disciplinary legal services organization whose mission is to keep families together through legal representation and social work support to prevent children from entering the foster care system or minimize their time away from home.

Law and social work students enrolled in the clinic will collaborate to engage in litigation and reform efforts on behalf of families and communities facing increased surveillance, policing, and disruption by the family regulation system.

Students in this clinic work together with CFR advocate teams to provide direct representation of parents in family court and fight for system change and racial equality through policy reform and advocacy with the City and State.

Fordham's Law's Criminal Defense Clinic, under the direction of Prof. Cheryl Bader and social work supervisor, Kaela Economos, is partnering with The Video Mitigation Project (VMP) of the Legal-Aid Society to educate clinic students in doing defense work with video mitigation and the advantages of visual advocacy.  To mitigate clients' sentences in criminal court, public defenders rely on written mitigation reports often accompanied by reams of mental health records, psychological evaluations and documents.  They are very often impersonal at best.  Used recently at private bar cases, mitigation videos enhance the technical record by conveying a client's relationships, mood, tone, pain and humility in a way that paperwork simply cannot. Video mitigation has a strong potential for low income clients. Of the 22 cases subitted by VMP, the work yielded reduced sentences, alternatives to incarceration, and elimination of bail conditions.

Rashika Jikaria '23, a clinic student, found dramatic benefits to the student as well to the client. She is eager to work with this project because it provides "an opportunity to create a story in a humanizing way that law students have not been able to use through the applicable law." Rashika's client, a young man in his 20's who has been in NYC since a small child, was charged with DUI, a misedemeanor. Because of his illegal status, he may suffer the harsh implications of deportation. Legal-Aid has hired an immigration attorney to represent him, but the team will have to show how his family, job, connections, and friends are all here.  Rashika is looking forward to telling his story through the use of video.

Housing affordability is one of, if not the most, significant domestic policy issues of our time. It sits at the intersection of so many other pressing social issues like environmental justice, gender rights, employment and, of course, education.  In Spring 2023, the Fordham Clinics will include a Rights to Housing Litigation Clinic, directed by Norrinda Brown Hayat.

Professor Hayat is an award winning housing advocate, and joined the full-time faculty in the fall.  Hayat comes to Fordham from Rutgers where she taught courses in Property Law, Critical Race Theory. and Landlord Tenant Law.  There, she also served as director of the Civil Justice Clinic, and as advisor to the African and Black Law Students Association and the Newark Housing Rights Coalition.

"I am excited to join Fordham's wonderful faculty and to teach and engage with students interested in aiding the right to counsel in eviction cases and joining the fight for the right to housing in New York City and beyond," said Professor Hayat.

Led by Professors Paolo Galizzi, Gay McDougall, Zenande Booi & Elisabeth Wickeri, students in the Clinic are working with international and regional experts, and civil society organizations on cases and projects that involve contemporary efforts to combat systemic racism and racist architectures in a range of contexts.

In particular, Clinic students are supporting the work of UN Committee on the Elimination of Racial Discrimination (CERD) expert member and co-director of the Global Antiracism Clinic, Gay McDougall, currently a Distinguished Scholar-in-Residence at Fordham Law School’s Leitner Center and Center on Race, Law and Justice.

The Black Lives Matters movement; the events recognizing the anniversary of the 20th seminal Third World Conference Against Racism in Durban South Africa; and the global outrage at the murder of George Floyd have all contributed to creating momentum that has propelled the UN to renew and refresh its commitment to fight against racism.

In the report, "Changing Hands: Recommendations to Improve New York's System of Gubernatorial Succession," the Rule of Law Clinic urges changes in the line of succession and would require confirmation of a new second-in-command.  In the past year since Governor Kathy Hochul ascended to her position from Lieutenant Governor, New York has also seen three people serve as Lieutenant Governor. Noting the multiple unexpected turnovers in the state's highest executive offices in recent years, the report underscores a "sobering reality that New York is unprepared to deal with a panoply of issues relating to gubernatorial succession."

"It is past time for New York to shore up its gubernatorial succession procedures, said Dean Feerick who played a key role in framing the U.S. Constitution's 25th Amendment, which deals with presidential succession and inability.

Listen to the podcast HERE.

Lincoln Square Legal Services, the professional law firm run by the faculty of Fordham Law’s clinical program, has launched its new website. The site spotlights the practice areas of the School’s live-client clinics and the clinical faculty lawyers who supervise them. It highlights news about the firm and its advocacy for, and victories on behalf of, clients.

Lincoln Square Legal Services provides Fordham Law students with valuable legal training. Students participate in all aspects of the casework and are supervised by Fordham Law clinical faculty throughout their work.