Why Your Lights Work and Your Life is Enlightened

Informatics, or the science of data and information, is engaging and fascinating field that tickles the amygdala and appeals to the human drive toward discovery. It provides frameworks for understanding both natural systems and the complex field of human psychology, including various aspects of business and marketing. This talk will focus on some intriguing challenges that Allen Gilmer and his company, Enverus, have faced in the field of energy, the informatics solutions they have deployed in both natural systems and human psychology, continuing challenges, and the consequences of those challenges for reducing energy poverty and improving human quality of life.

RSVP for the Clavius Distinguished Lecture 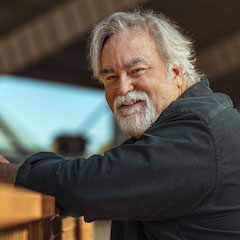 Allen is the Founder of Enverus, formerly Drillinginfo, the energy industry’s leading data, software, and insights company. Today, Enverus’ innovative technologies empower more than 5,000 customers across 50 countries, and Enverus has more than 1,000 employees in offices across the globe. Prior to founding Enverus, Allen was an independent oil and gas producer and entrepreneur of three successful oil and gas companies that have sourced more than 100 million barrels of oil.

In addition to leading Enverus for 16 years, Allen is the immediate Past Chairman of the Texas Independent Producers and Royalty Owners (TIPRO), past Texas Chair and National Board member of the DOE's Petroleum Technology Transfer Council (PTTC), and member of the Development Board of the University of Texas at El Paso (UTEP), Advisory Board of UTEP's College of Science, Colorado School of Mines Petroleum Engineering Advisory Board Member, and several other nonprofit organizations. He was selected as UTEP's Distinguished Alumni in 2017, Austin Business Journal's Large Company CEO of the Year in 2014, Top 7 Upstream Influencers in 2014, Texas Monthly's Texas Outstanding Geoscientist in 2012, E&Y's Entrepreneur of the Year in Central Texas in 2012, and Top 100 Energy Influencers in 2011. Allen is also a member of the Texas Business Leadership Council, a statewide network of CEOs and senior business executives who advance a long-term vision of a prosperous Texas in a globally competitive business environment.

D. Frank Hsu is Clavius Distinguished Professor of Science and a professor of computer and information science at Fordham. He has also served as chair of the department and as associate dean of Fordham’s Graduate School of Arts and Sciences, and co-founded the Master of Science programs in computer science (1996), cybersecurity (2014), and data analytics (2016). Hsu received a bachelor’s degree from Cheng Kung University in Taiwan, a master’s degree from the University of Texas at El Paso, and a doctorate from the University of Michigan.

The Clavius Distinguished Lecture is named for Christopher Clavius, S.J., a celebrated 16th-century mathematician and astronomer. In 1582, upon request from Pope Gregory XIII, Clavius helped develop the Gregorian calendar, which is still in use today. For 45 years, Clavius was a university professor at the Jesuit-run Collegio Romano, now known as the Pontifical Gregorian University, where he advocated master classes to position Jesuit trainees at the forefront of European scholarship. One of his students, Matteo Ricci, S.J., later translated Clavius’ works into Chinese, which ushered in a period of scientific innovations in China. Widely considered the most influential scholar and teacher of the Renaissance, Clavius was an early advocate of Galileo Galilei, whose heliocentric model of the universe upended the longstanding Ptolemaic system.