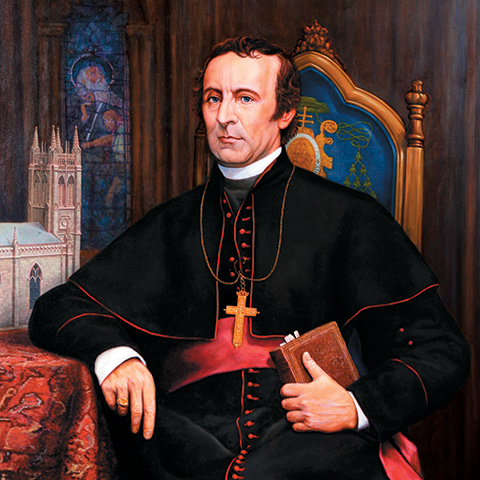 John Joseph Hughes was born on June 24, 1797 in County Tyrone, Ireland. He was raised there until immigrating to the United States in 1817. Once settled with his family in Chambersburg, Penn., Hughes made several unsuccessful applications to be admitted to Mount St. Mary's College in Emmitsburg, Md. He was eventually hired by its rector, the Abbé John Dubois, S.S., as a gardener. During this time, he befriended Mother Elizabeth Ann Seton. Seton was favorably impressed by Hughes and persuaded Dubois to reconsider his admission. Hughes was subsequently admitted as a regular student of Mount St. Mary's in September 1820.

In his time as a seminarian, Hughes devotedly served his home diocese of Philadelphia. On October 15, 1826, he was ordained to the priesthood by Bishop Henry Conwell at St. Joseph's Church in Philadelphia. During his early years as a priest, Hughes faithfully carried out his ministerial duties but also succeeded in bringing new life and an air of vibrancy to the Church he so deeply cared for in Philadelphia. Hughes founded St. John's Orphan Asylum in 1829 and was responsible for the structuring of a new church, St. John the Evangelist, in 1832. St. John the Evangelist became regarded as one of the finest and most impressive churches in the country at that time.

Hughes' passion for the welfare of the Church and his innate sense of initiative was soon recognized by the Catholic Church far beyond the confines of the Diocese of Philadelphia. On August 7, 1837, Pope Gregory XVI called upon Hughes to serve as the coadjutor bishop for the then Diocese of New York.

Consistent with his desire to educate people on the Word of God, Hughes began searching in 1838 for a suitable location to establish a new seminary and college. It was not long before Hughes resolved that the 100 acres of Rose Hill Manor bordering the Bronx River was the perfect spot. After three short but productive years, St. John's College (now Fordham University), the first Catholic institution of higher learning in the northeast, was established. In 1846, St. John's College was sold to the Jesuit Order and Archbishop Hughes recruited five Jesuit priests from St. Mary's College in Kentucky to staff the College. On April 10th of the same year, the governor of the State of New York granted the College a university charter. Then, in 1907, after the recent addition of a law school and medical school, the name was changed to Fordham University, and St. John's College became Fordham College. After remaining a men's college for 133 years, Fordham College merged with Thomas More College for women in 1974, becoming coeducational. 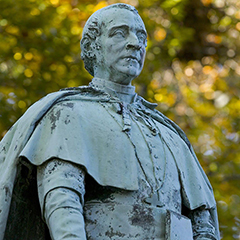 After his thoughtful work founding what we now call Fordham University, Hughes went on to succeed his predecessor and former rector, Bishop John Dubois, in late December of 1842.  In becoming the bishop of the Diocese of New York, Hughes assumed responsibility for a diocese that stretched across the entire state of New York and northern New Jersey. Always a man eager to spread God's holy Word, he embraced this new position with both courage and conviction. He worked zealously to uphold the dignity of each human being and the integrity of the Catholic faith, standing in unique solidarity with the Irish immigrants of his time and giving careful consideration to the ways by which young children were being educated on the foundations of the Catholic faith. And when the Diocese of New York was elevated to the status of an Archdiocese by Pope Pius IX, so, too, was Hughes' own status elevated to that of an Archbishop.

The vision of "Dagger John," as Archbishop Hughes became known due to his aggressive and determined personality, remains actively alive at Fordham today. We know this because the men and women of Fordham emerge from their Jesuit experiences and are guided by conscience, empowered by competence, and fortified by a sincere sense of compassion. These are the characteristics of men and women who live with and for others.