How to Improve Presidential Succession

Fordham Law has a rich history with the 25th Amendment that begins with one graduate, John D. Feerick ’61, who helped draft the amendment.

Amid the amendment’s 50th anniversary in the 2016–2017 academic year, 14 Fordham Law students in the Presidential Succession Clinic carried on the School’s legacy.

History says so.
Six times the 25th Amendment has come in handy:

The president should create a prospective declaration of inability allowing the vice president to initiate a transfer of power during an emergency when there is no time for the cabinet to weigh in under the 25th Amendment's Section 4.

While Reagan was in surgery following the 1981 assassination attempt, it was unclear who was in charge because the 25th Amendment was never invoked. On 9/11, Bush wasn’t easily reachable when major decisions, such as authorizing the military to shoot down airliners, needed to be made.

#2 – The president needs a clear head.

A mental health professional should be part of the White House Medical Unit.

Following his son’s death, Calvin Coolidge fell into a depression that may have severely affected his presidency. The impact, to varying degrees, of psychological and cognitive issues on other presidents is discussed in the clinic's report.

#3 – The line of succession needs a refresh.

Congress should remove legislators and some cabinet departments from the current line of succession and allow the president to nominate several “standing successors” to replace those officials.

The current inclusion of legislators might not be constitutional and could lead to a change in party control of the White House, and some Cabinet secretaries might not be prepared to serve as president.

Congress should plan for a scenario where Section 4 of the 25th Amendment requires it to resolve a disagreement over the president’s capacity to serve in part by preparing to create a bipartisan committee with members from both houses to gather information. 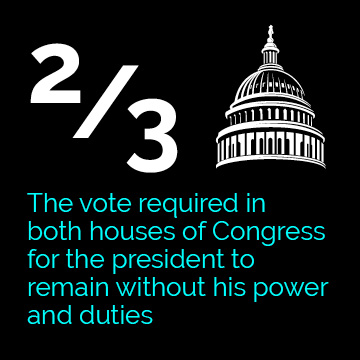 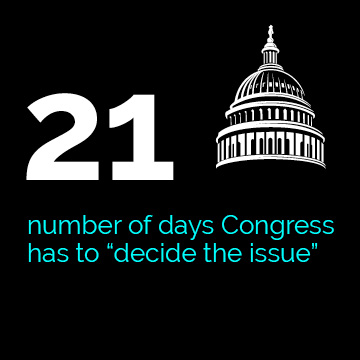 #6 – Presidential candidates need to be transparent about their health.

A commission should create guidelines for what presidential candidates should reveal about their health. 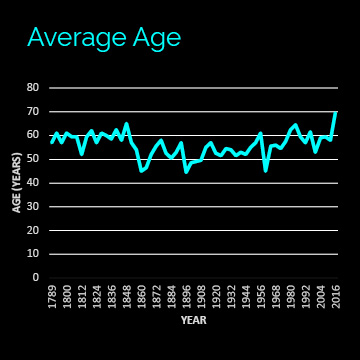 The clinic's report details the many times candidate health has become a campaign issue. As the age of candidates increases, health may become an even more significant factor—as it did during the 2016 campaign when the candidates had the highest average age ever.

The political parties should make the vice presidential nominee the automatic successor to the presidential nomination if there is a vacancy right before an election and allow a special committee within the party to recommend a replacement nominee if a vacancy occurs earlier in the campaign. The parties should also create rules for removing medically incapacitated nominees.

During the 2016 campaign, some prominent Republicans called on Donald Trump to drop out after the release of the Access Hollywood tape. Democratic National Committee Chair Donna Brazile considered removing Hillary Clinton from the ticket after she collapsed at the 9/11 memorial. Both scenarios would have implicated the parties' replacement procedures.