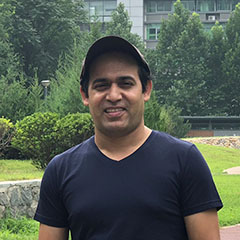 Dr. Alam is currently an Assistant Professor of Computer and Information Sciences at the Fordham University, NY, USA. Prior to joining Fordham, he has been an assistant professor of Temple University, USA. He received the PhD degree and the MEng degree in Computer Science and Technology from CSU, in 2013 and 2009 respectively. His research interests lie in dependable cyber-physical system design and development in multi-disciplinary research fields (networked and distributed sensing systems, monitoring software/tool design, cyber security, and data mining), and cloud computing.

He was as a Postdoctoral Research Fellow at the School of Software and the School of Information Science and Engineering, Central South University (CSU), China, a Research Assistant at the Dept. of Computing at the Hong Kong Polytechnic University in 2010-2011 and a Software Engineer at several international software companies. He was a recipient of the "Young Scientist" award with Youth Scientific Fund (2015-2017) from NSF of China and the "Best PhD Thesis Award" from Hunan Province of China, and "IEEE Outstanding Leadership Award 2016." His papers have appeared in the prestigious journals/conferences in the domain, including IEEE TII, IEEE TC, IEEE TPDS, IEEE TDSC, ACM CS, ACM TOSN, ACM TAAS, IEEE SECON, IEEE/IFIP DSN, IEEE SRDS, IEEE DCOSS, IEEE MASS, IEEE DASC, and so on. He got the "IEEE Outstanding Leadership Award 2016" and the "Best Paper Award" at the IEEE ISPA 2013, Melbourne, Australia. He is a General Chair for IEEE Ubisafe 2016, DependSys 2016 and BigTrust2016 and a Program Chair for IEEE DASC'17, I-SPAN'16, IEEE DASC 2016, SSCC’16 (Springer), and SpaCSS 2016 (Springer). He has been an associate editor of International Journal of Computers and Applications, a lead Guest Editor of ACM Transactions of Cyber-Physical Systems, IEEE Transactions on Big Data, Information Science Journal, a Guest Editor for FGCS and IJES, a Workshop Chair, Publicity Chair, TPC member for 60+ international journal/conference proceedings. He is a member of IEEE, and a member of ACM.