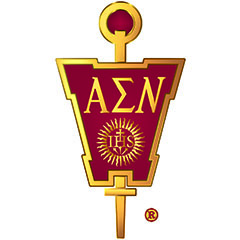 Juniors, seniors, and graduate students at Jesuit colleges and universities who are in the top 15% of their class academically and have a demonstrated record of service and loyalty to the Jesuit ideals of education are considered for membership. Only 4% of each class may be inducted.

Undergraduate students are nominated automatically if they fall within the top 15% of their class (while the exact number may fluctuate year to year, the cumulative GPA is approximately a 3.8 or higher).

Graduate students are nominated by their school’s dean. They must be in the top 15% of their class and have completed more than 50% of their coursework.

Late September/Early October: Invitations to apply to Alpha Sigma Nu will be emailed to those who are nominated to the society. The invitation includes an electronic application that must be completed in order to be considered for membership. The application strives to ascertain the applicant’s commitment to service and their loyalty to Jesuit ideals.

November: Applications are due and will be reviewed by the selection committee. Nominees are also vetted and approved by the dean of students, the dean of the college, and the president of the University.

Mid-December: Notifications of membership are sent out to applicants. Only those nominees who completed an application will be notified.

January: Membership dues for lifetime membership ($100) are due.

April: The induction ceremony is held. The president and provost of the University, along with the deans of the colleges, present the new members with their Alpha Sigma Nu pin and membership certificate.