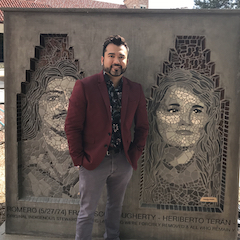 As an American Studies scholar, Robb Hernández’s approach to Latinx literature is interdisciplinary combining literary studies with visual culture, contemporary art history, performance studies, and museum/exhibition research. He is the author of Archiving an Epidemic: Art, AIDS, and the Queer Chicanx Avant-Garde (NYU Press, 2019), which catalogs a queer retelling of the Chicana and Chicano art movement, from its origins in the 1960s, to the AIDS crisis and the destruction it wrought in the 1980s. From remnants, he unveils alternative archival formations in subterranean spaces of queer custodians and collectors to show not what Chicanx art is but what it could have been. In 2017, he co-curated Mundos Alternos: Art and Science Fiction in the Americas, the first major exhibition to examine three decades of Latinx and Latin American science fiction artistic practices. The show travelled nationally and was sponsored by the Getty Foundation’s Pacific Standard Time: LA/LA initiative in 2017.

He is also the author of VIVA Records 1970-2000: Lesbian and Gay Latino Artists of Los Angeles (2013) and The Fire of Life: The Robert Legorreta—Cyclona Collection, 1962-2002 (2009), published in the “Chicano Archives” series from the UCLA Chicano Studies Research Center Press. In 2017, he co-edited the dossier, “The People of Paper/La Gente de Papel: Rethinking Aztlán’s Printed Matters” for Aztlán: A Journal of Chicano Studies. His related articles on a nexus of trans and queer Latinx artists in the U.S. and Latin America have appeared in American Art Journal, ASAP/Journal, Journal of Visual Culture, MELUS, Radical History Review, and TSQ, among other books and anthologies.