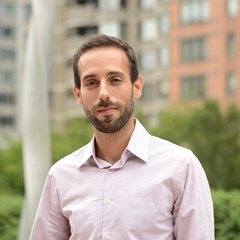 Research and Teaching Interests: Late medieval English literature, drama, and culture; early modern drama; aurality and sound studies; music and literature; history of the senses and the body; history of the book and reading practices; performance and cultural theory

Andrew Albin's scholarship in the field of historical sound studies examines embodied listening practices, sound’s meaningful contexts, and the lived aural experiences of historical hearers – in a word, the sonorous past – as an object of critical inquiry. His work has been recognized with grants and fellowships from the American Council of Learned Societies, the Medieval Academy of America, the Pontifical Institute of Mediaeval Studies, and the Yale Institute of Sacred Music. He facilitates the Fordham Medieval Dramatists in their biennial performance of early English drama for public audiences at Fordham and in NYC. Publications include Richard Rolle’s Melody of Love: A Study and Translation, with Manuscript and Musical Contexts (Pontifical Institute of Mediaeval Studies, 2018) and articles addressing sonorous materiality in the performance of Richard Rolle’s votive office (Speculum 91.4 [2016]), sonorous identification in the Chester shepherd's play (Early Theatre16.2 [2013], winner of the Best Essay Prize for 2013-2015), and scenes of hearing in Chaucer's Prioress's Tale (The Chaucer Review 48.1 [2013]). Other contributions include a chapter on the aesthetics of spiritual song in Voice and Voicelessness in Medieval Europe (Palgrave MacMillan, 2015), a digital essay on contemporary sound artist Janet Cardiff’s Forty Voice Motet, and forthcoming chapters on medieval approaches to listening to Arvo Pärt and the sound of poetic form in the Middle English devotional lyric. He is currently working on a monograph that develops theoretical frameworks and methodological tools for encountering the medieval manuscript as an interactive sonorous instrument.