Equiano's Trifles
Equiano in 1794
The Other Interesting Narrative 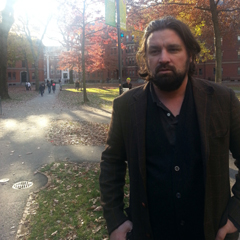 John Bugg is author of Five Long Winters: The Trials of British Romanticism (Stanford University Press, 2014), and editor of The Joseph Johnson Letterbook (Oxford University Press, 2016). His essays and reviews have appeared in PMLA, ELH, Eighteenth-Century Studies, TLS, Romanticism, The Huntington Library Quarterly, European Romantic Review, and Keats-Shelley Journal. He is currently at work on a book project entitled "Treaty Poetics: British Literature and Peace, 1783-1818." He has held fellowships from the Whiting Foundation, the Society of Fellows at Columbia University, and the National Endowment for the Humanities. He is co-founder, with Sarah Zimmerman, of the Fordham Romanticism Group.