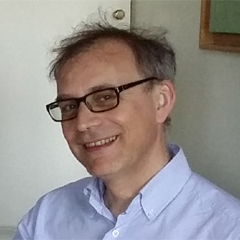 Christopher GoGwilt is the author of The Passage of Literature: Genealogies of Modernism in Conrad, Rhys, and Pramoedya (Oxford, 2011) which won the Modernist Studies Association book prize for 2012.  He is also the author of The Fiction of Geopolitics: Afterimages of Culture from Wilkie Collins to Alfred Hitchcock (Stanford, 2000) and The Invention of the West: Joseph Conrad and the Double-Mapping of Europe and Empire (Stanford, 1995). He has published numerous essays in the areas of Victorian studies, modernism, colonialism, and post-colonialism as book-chapters and in such journals as Comparative Literature Studies, Cultural Critique, Modernism/Modernity, Mosaic, New German Critique, Victorian Studies, and The Yale Journal of Criticism. Recent publications include "The Novel and the Nation" (for A Companion to the English Novel. Wiley-Blackwell, 2015). He is the co-editor of the volume of essays Mocking Bird Technologies: The Poetics of Parroting, Mimicry, and Other Starling Tropes (Fordham University Press, 2018). His website is chris.gogwilt.com.