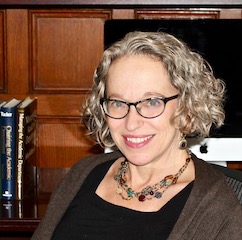 Eve Keller is co-editor (with Kimberly Coles, UMD) of the Routledge Companion to Women, Sex, and Gender in the Early British Colonial World (Routledge, 2018); co-author (with Millie Werber) of Two Rings: A Story of Love and War(PublicAffairs, 2012), and author of Generating Bodies and Gendered Selves: The Rhetoric of Reproduction in Early Modern England (University of Washington, 2007). Her work on the literature, science, and medicine of early modern England has appeared in Milton Quarterly, Eighteenth-Century Studies, English Literary History, Women’s Studies, Prose Studies, and elsewhere. She is a past president of the Society for Literature, Science, and the Arts (SLSA), a national academic organization that fosters discussion about the cultural and social interconnections among the sciences and humanities. She currently serves as the Director of the Honors Program at Fordham College at Rose Hill and as President of Fordham's University Faculty Senate.