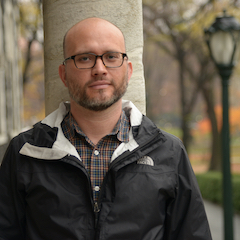 Corey McEleney is the author of Futile Pleasures: Early Modern Literature and the Limits of Utility (Fordham University Press, 2017). Essays based on this and other research have appeared in the journals ELH, GLQ, and differences, as well as in the collections New Formalisms and Literary Theory (Palgrave Macmillan, 2013) and The Age of Thomas Nashe (Ashgate, 2013). He is currently working on a new book project tentatively titled The Art of Overanalyzing.