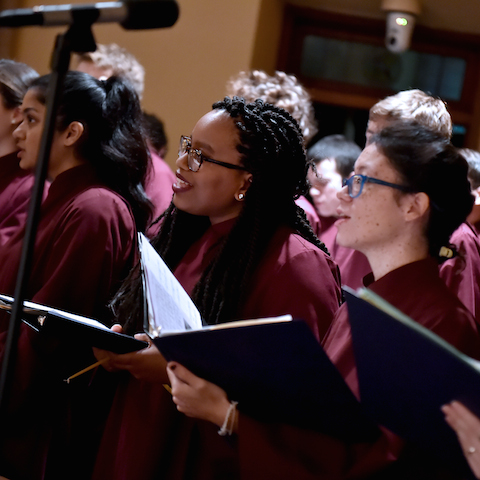 Fordham offers each student a wealth of musical opportunities. Not only can students hear great music in the concert halls and churches of Manhattan but also experience this music firsthand through participation in a university choir. Whether concert oriented, or for the worship life of the University, each choir is committed to excellence and service.

Auditions for Concert and Schola Cantorum are held at the beginning of each semester or by individual appointment.

The choir groups at Fordham University participate in recitals and group events throughout the year. More information on each choir, rehearsals, and auditions can be found here.

Festival of Lessons and Carols

The original Roosevelt Tracker organ in the University Church was built in 1879 and it brought a distinctly French Baroque sound to the center of spiritual life at Rose Hill for more than 130 years. That organ was expanded and converted to an electro-pneumatic instrument in 1929 and restored by the Lehigh Organ Company in 1979. The new Maior Dei Gloria (“Greater Glory to God”) Organ, built by Schoenstein & Co. in California, was installed in November 2012. “The old organ was built to emulate an organ you would find during the Baroque era in France, so it lacked a lot of what we call color stops,” said Robert Minotti, Fordham’s director of liturgical music. “It didn’t have a lot of foundational stops to support congregational singing, so it didn’t have the variety of sounds that are expected today in liturgical celebrations, which often go from Baroque music to contemporary music in supporting hymns.” In addition to a greater range, the new organ is equipped with technology that fosters better coordination between it and the smaller organ at the front of the church. To achieve its full array of sounds, the new organ occupies more space on the choir loft wall of the church, with pipes that play the eight lowest notes taking up as much as two feet each in diameter.