Pioneering Women in Philanthropy at Fordham 2019 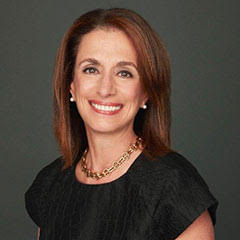 Rose Marie Bravo, CBE, TMC ’71, was vice chairman of Burberry, the international luxury goods company with headquarters in London, until June 2007. From 1997 until 2006, while serving as the chief executive of the company, she and her team embarked on a repositioning of the brand with strategic initiatives in design, marketing, merchandising, licensing, wholesale, and retail distribution.

Prior to her appointment at Burberry, Rose Marie was president of Saks Fifth Avenue from 1992 to 1997, with responsibility for merchandising, marketing, and product development. She also served as a member of the board of directors of Saks Holdings Inc.

From 1974 to 1992, Rose Marie held positions of increasing responsibility at R.H. Macy and Co., culminating with her 1987 to 1992 tenure as chairman and chief executive officer of the I. Magnin specialty division. She began her retailing career at Abraham & Strauss in 1971.

In recognition of her services promoting British fashion, Rose Marie was named a Commander of the British Empire (CBE) by Her Majesty Queen Elizabeth II in June 2006. Additionally, The Council of Fashion Designers of America, The National Italian American Foundation, March of Dimes, City of Hope, and Phoenix House have honored her for excellence in fashion and retailing. She served on the board of Williams-Sonoma from 2011 to 2018, and she currently serves on the boards of Tiffany & Co. and The Estée Lauder Companies.

Rose Marie is a strong and impassioned advocate for higher education. In 2003, she established the Biagio and Anna Lapila Endowed Scholarship Fund in honor of her parents. And in 2015 she created the Rose Marie Bravo Endowed Scholarship for students studying theology or a related field. A past member of the Fordham University Board of Trustees, she is a 2006 recipient of the Fordham Founder’s Award and a 2011 inductee to Fordham’s Hall of Honor.