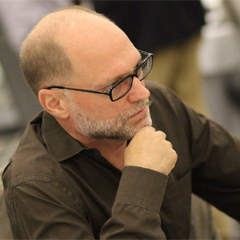 Glenn Hendler is a writer and scholar about popular and unpopular literature in the 19th century as well as of film, television, music, and contemporary cultural politics. He teaches courses in US literature and culture, sound studies, and cultural theory. Hendler has authored two books--Public Sentiments: Structures of Feeling in Nineteenth-Century American Literature (North Carolina, 2001) and a volume in Bloomsbury’s “33 1/3” series on David Bowie's Diamond Dogs (2020)--and has co-edited two others: Sentimental Men: Masculinity and the Politics of Affect in American Culture (with Mary Chapman. California, 1999) and an edition of Walt Whitman's temperance novel Franklin Evans; or, The Inebriate (with Christopher Castiglia. Duke, 2007). With Bruce Burgett, Hendler created and curates the widely taught book and website Keywords for American Cultural Studies (NYU; third edition 2020). In 2021 he is completing two essays, one for the Oxford Companion to Walt Whitman on "Walt Whitman and the Police," and another on the US single version of David Bowie's "Rebel Rebel," for an essay collection titled One-Track Mind: Capitalism, Technology, and the Art of the Pop Song, edited by Asif Siddiqi and forthcoming from Routledge. Some of Hendler’s occasional essays can be found on the Avidly blog.