Book Award for The McGannon Center

The Promise of Access: Technology, Inequality, and the Political Economy of Hope 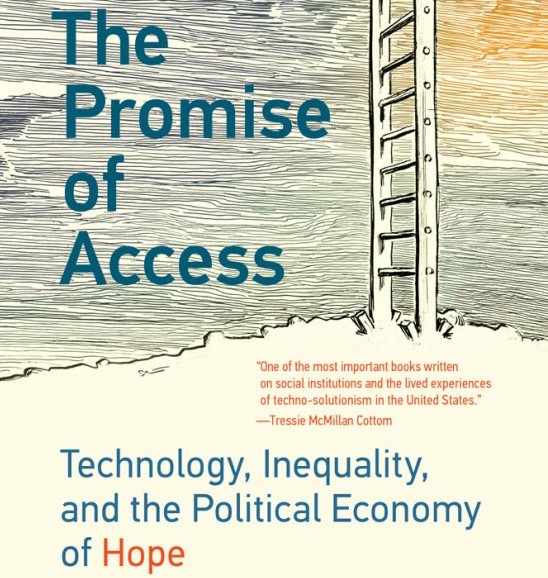 The McGannon Center is thrilled to announce the winner of the McGannon Book Award honoring the best book published in 2021 that concerns media policy, activism, and social justice to Daniel Greene’s The Promise of Access: Technology, Inequality, and the Political Economy of Hope.

The award committee unanimously agreed that the Promise of Access provided an impressive expansive and nuanced empirical critique of what Greene calls the “access doctrine:” the often techno-solutionist perspective of projects designed to increase access to internet services, hardware, and digital skills. Importantly, Greene goes beyond showing how individual initiatives might fail to illustrate how even “successful” programs can lose sight of or work against their primary goals of helping underserved groups address systemic racial and economic inequity. The committee was particularly impressed by how The Promise of Access weaves together multiple cases to tell a compelling story of how the very culture of these initiatives—the ways they rely on funding, PR, political support—decenters the experiences and needs of those who are ostensibly being targeted for help.

This book comes at an important time. Amidst the pandemic’s highlighting of very real issues of access, an abundance of resulting programs aimed at improving access, and populations that remain woefully underserved, Greene’s work should be considered an important intervention how to design access programs that do serve those who most need them, and in the limits of technology as a way to solve poverty.

2014 – Low Power to the People (MIT) by Christina Dunbar-Hester (Rutgers, USC) and The War on Learning (MIT) by Elizabeth Losh (William & Mary)

2012- Why Americans Hate the Media: And How it Matters (Princeton University Press) by Jonathan Ladd (Georgetown University).

2010- The Death and Life of American Journalism (Nation Books) by Robert McChesney (University of Illinois) and John Nichols; and The Master Switch (Knopf) by Tim Wu (Columbia University).

2000- Code and Other Laws of Cyberspace (Basic Books) by Lawrence Lessig (Stanford University).

1998- Privacy on the Line (MIT Press) by Whitfield Diffie and Susan Landau.

1991- “The Periphery in the Center: The Information Age and the ‘Good Life’ in Rural America” by A. Calabrese (University of Colorado) in Gazette: The International Journal of Mass Communication Studies (April 1992).