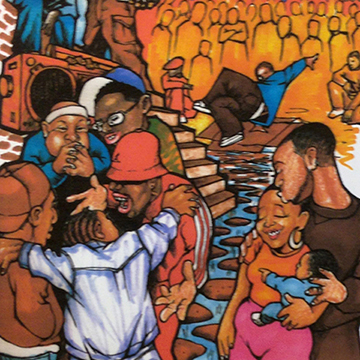 With respect to archival records, the BAAHP has been fortunate to access several important collections. The papers of Rev. Wendell Fosters, the first black City Councilman for The Bronx as well as copies of one of the earliest African American newspapers in the borough, The Listener, which were donated to The Bronx Archives at the Historical Society. In addition, David Carp, a musicologist, donated a major collection of interviews and related materials regarding Latino jazz in New York. The records of the major civic organizations in the borough, The Northwest Bronx Community and Clergy Collation, have also been donated. The NWBCCC has had much to do with improving life for African Americans and others during the past quarter century, through local community organizing. All of these collections are available to students and researchers at The Bronx County Historical Society and the Walsh Library at Fordham. Lastly, the papers of Dennis Coleman, a civil rights leader and former State Senator, have been donated.

In order to locate other records pertaining to Bronx-based African Americans, The Bronx County Historical Society applied for and received a grant from the Metropolitan New York Library Council’s (METRO) Documentary Heritage Program (funded by the New York State Archives) in 2006 to conduct an archival survey of records documenting the true breadth and depth of African American life in The Bronx. This grant was awarded to the Historical Society, effective July 1, 2006 and was subsequently authorized for a second year beginning July 1, 2007. It has been directed by Dr. Peter Derrick, Archivist at The Bronx County Historical Society, and Dr. Brian Purnell, Professor of African American history at Fordham University and Research Director of the BAAHP. Work on the Bronx AfricanAmerican Archival Survey (BAAAS) has been done primarily by Project Archivist Megan A. Hibbitts. She has been assisted by former Assistant Project Archivist K. Morgan Powell and Project Assistant Concetta Gleason.

During the first year of the BAAAS, several detailed archival surveys have been completed. The BAAHP hopes that this archival survey will benefit researchers interested in African Americans in The Bronx. If you have any questions about the project, please contact Megan Hibbitts at mhibbitts@bronxhistoricalsociety.org , Peter Derrick at pderrick@bronxhistoricalsociety.org.

The Bronx African American Archival Survey was made possible thanks to funding provided by the Metropolitan New York Library Council’s (METRO) Documentary Heritage Program, which is funded by the New York State Archives.

The Bronx African American Archival Survey greatly appreciates the support provided by the institutions and individuals that were surveyed during this project. Without their support, this project would have not been possible.