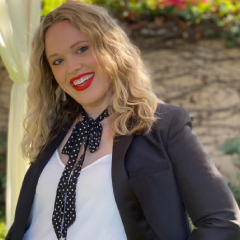 Jennifer Moorman earned her Ph.D. in Cinema and Media Studies from UCLA in 2014. Her research focuses on gender, sexuality, race, class, and dis/ability in film, television, and online media. Her research interests include media industries and production studies, gender and sexuality studies, film and television genres, ecocriticism, critical carceral studies, experimental film and video, queer theory, and the political economy of pornography. Her published work has touched on women directors of adult video and representations of queer women in U.S. television programming. She is currently working on a book manuscript, entitled The Softer Side of Hardcore? Women Filmmakers in Pornographic Production Cultures. Before joining the Communication & Media Studies faculty at Fordham, she was a Visiting Assistant Professor of Women's and Gender Studies at Loyola Marymount University, and has also lectured at UCLA, CSU Long Beach, Otis College, and Chapman University. In addition to teaching for CMS, she is affiliated faculty and serves on the board of the Women's, Gender, and Sexuality Studies program.