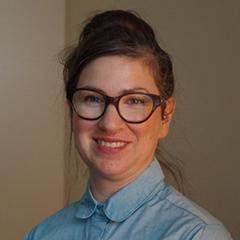 Dr. Schwartz is a feminist materialist media theorist with particular interest in the role of embodiment in communicative praxis. She understands communication to be, at its base, a radical encounter between self and other. Her work seeks to move past a politics of representation into what poet Francesca Lisette has called "revolutionary tenderness": a theoretical attentiveness to practices of care as sites of resistance and reinvention. Her first book, Dead Matter, looked at the corpse as the center of cultural assemblages of mourning, martyrdom, and celebrity. Her current project is an essay on feminist ontology in the digital age, and her next book project will be about translation as a model for communication ethics.

“An Absolutely Patient Action: The Translator as a Figure of Ethical Communication.”  [sic]: A Journal of Literature, Culture, and Literary Translation.  Year 2, Number 1, 12/2011. www.sic-journal.org.

“The Horror of Something to See: Celebrity ‘Vaginas’ as Prostheses” in Holmes and Negra, eds.  In the Limelight and Under The Microscope: The Forms and Functions of Female Celebrity, Continuum, 2011.