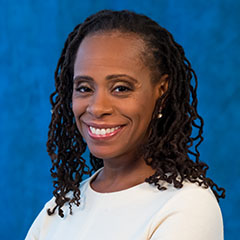 Keynote: Leveraging Your Time, Talent, and Treasure to Make a Difference

Anne Williams-Isom is the chief executive officer for the Harlem Children’s Zone, a nonprofit devoted to breaking the cycle of generational poverty in Central Harlem. In her previous post, as the organization’s chief operating officer, she oversaw all the programs in its cradle-through-college pipeline, including Promise Academy I and II; led a staff of more than 2,000; and strengthened the organization’s use of data to improve services and outcomes for its 25,000 children and families.

Williams-Isom earned a bachelor’s degree from Fordham University, after which she began working in community affairs for the New York Police Department. As a student at Columbia Law School, she discovered her passion for advocacy work and came to appreciate the critical role played by communities in finding lasting solutions to social problems. After receiving her J.D., she practiced law for five years at two prestigious firms in New York before joining the city’s Administration for Children’s Services, concluding her 13-year tenure there as deputy commissioner of the Division of Community and Government Affairs.

Williams-Isom serves on the advisory council of the recently created My Brother’s Keeper Alliance, inspired by former President Barack Obama’s My Brother’s Keeper initiative, as well as on Fordham University’s President’s Council. In 2016, she was appointed by New York City Mayor Bill de Blasio to his Children’s Cabinet Advisory Board and was selected to be a member of the spring 2016 cohort of the Pahara-Aspen Education Fellowship. She serves on the board of directors of Child Trends, a nonprofit research organization, and the board of trustees of the Central Park Conservancy. Regularly sought after for her expert guidance on child welfare and community development, Williams-Isom has been featured in The New York Times, Barron’s, Crain’s New York, The Chronicle of Philanthropy, and Essence, as well as on WABC’s Here and Now and CUNY-TV’s Black America.