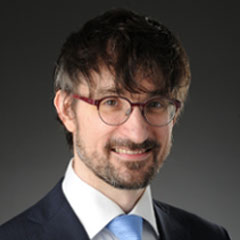 Benjamin M. Cole, Ph.D., holds the William J. Loschert Endowed Chair of Entrepreneurship at the Gabelli School of Business at Fordham University and currently serves as Area Chair for the Strategy & Statistics Area. His professional accomplishments include:

Dr. Cole uses global research settings to investigate how social factors—such as legitimacy, status, logics and media framings—influence technological innovation, regulatory oversight and economic transactions. He also holds a key interest in the disruptive nature of blockchain on existing industries; he teaches courses on blockchain and strategy. Dr. Cole is the organizer of the Blockchain Disruptor Conference and serves as an external advisor to several blockchain
initiatives, where he specializes in helping them articulate and monetize their unique business models.

Before entering academia, Dr. Cole lived in Japan for nine years, where he worked as both a translator for a Japanese textbook company and as a corporate representative for Japan’s largest automaker, Toyota Motor Corporation. During that time, he had interactions with representatives of the Ministry of Education, Culture, Sports, Science and Technology (MEXT) and the Ministry of Economy, Trade and Industry (METI), and was involved in preparing materials used in the 1995 Japan-U.S. trade negotiations. He was a key player in introducing the Toyota Hybrid System and the Fuel Cell Hybrid System technologies to the global media and financial community, and acted as simultaneous interpreter for Executive Vice President Akihiro Wada in charge of global technology. He also communicated firm decision-making on foreign direct investment in China, India, Poland, and the U.S., as well as coordinated projects between Japan, Belgium, Malaysia and the U.S. In short, Dr. Cole has personal experience with many of the topics that managers face in this globalized environment. As a bilingual and a former expatriate, Dr. Cole is keenly interested in cross-cultural hurdles to effective management. Dr. Cole earned his B.A. in Japanese Language & Culture from Occidental College, and his M.B.A. (with Distinction) and Ph.D. in Strategy from the Ross School of Business at the University of Michigan.

View the full list of publications on Google Scholar.