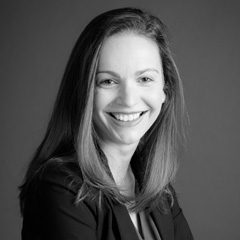 A former Truman Scholar from New York and Rhodes Scholar district finalist, Professor Cosenza entered into private practice at Davis Polk & Wardwell LLP upon graduation from Harvard Law School. Her practice areas included securities law, credit, and mergers and acquisitions. Recently, the New York Law Journal selected Professor Cosenza as one of its Rising Stars—an elite group of attorneys under age 40 who “have established a record of accomplishments and demonstrated that they are top contributors to the practice of law and their communities.”

In addition, she has authored and published on important issues relating to corporate governance, including The Holy Grail of Corporate Governance Reform: Independence or Democracy?, 2007 B.Y.U. L. REV. 1, which was cited by the Delaware Court of Chancery in Jana Master Fund v. CNET Networks, 954 A.2d 335 (Del. Ch. 2008)—an important decision on shareholder proxy access.

Professor Cosenza also has written on venture-capital investments and damages issues flowing from such investments, including Co-Invest At Your Own Risk: An Exploration of Potential Remedial Theories for Breaches of Rights of First Refusal in the Venture Capital Context, 55 AM. U. L. REV. 88 (2005).

At Fordham, Professor Cosenza teaches Legal Framework of Business, Commercial Transactions, Business Law I, Securities Law, and Survey of the Law. She has served in several leadership positions at Fordham. In addition to her current role as chair of the law and ethics area, she previously served on the Gabelli School’s Executive Committee and as the secretary of the Gabelli School’s Joint Council.

Professor Cosenza is fluent in Portuguese and has basic knowledge of spoken and written French and Spanish.