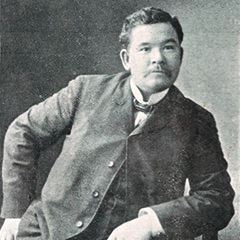 Dr. James Joseph Walsh, physician, author, and Catholic intellectual, was also an imaginative and engaging professor of medicine. While others celebrated the sanctity of the lecture hall, Walsh also emphasized clinical experience and was famous around Rose Hill for sending his students out of the classroom and into the neighboring New York Zoological Society (later renamed the Wildlife Conservation Society) and the New York Botanical Garden to perform field research.

An 1884 graduate of St. John’s College, he received his master’s degree from the University of Pennsylvania and went on to earn a doctoral degree in 1892. After additional postgraduate work and travel in Paris, Vienna, and Berlin, he returned to New York, where, in 1906, he was appointed acting dean of Fordham’s School of Medicine. He also served as professor of medical history and nervous diseases, and helped increase the school’s enrollment and endowment during his brief tenure. One of the highlights of his administration was Carl Jung’s delivery at Rose Hill of a series of seminal lectures that marked the young psychoanalyst’s break from his teacher, Sigmund Freud.

Throughout his career, Walsh contributed extensively to the New International Encyclopedia and to numerous medical and academic journals, as well as a variety of popular works. He was also the founding director of Fordham University Press, which published many of his books and remains the nation’s oldest Catholic university press. In his life and his work, he personified the mission of the press: to represent and uphold the values and traditions of Fordham University, and to further those values and traditions through the dissemination of scholarly research and ideas.