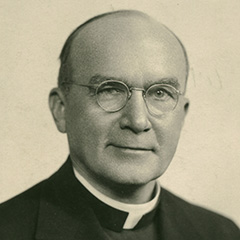 John Fidelis Hurley, SJ
Fordham College at Rose Hill, Class of 1914
Wartime Jesuit Superior in the Philippines
Recipient of the U.S. Medal of Freedom
(Inducted in 2016)

During the Japanese occupation of the Philippines from 1942 to 1945, when internment camps around Manila swelled with civilians and Allied prisoners, one Jesuit priest earned the nickname “Father Mercy” for his efforts to ease their suffering. The heroic work of that priest, John Fidelis Hurley, S.J., would have an enduring impact on the welfare of the Philippine people.

A native of New York City, Father Hurley attended Xavier High School and graduated from Fordham College in 1914. He entered the Society of Jesus the following year and, after serving on the faculty of the Ateneo de Manila in the Philippines from 1921 to 1924, rejoined its faculty in 1929. In 1936 he was named superior of the Jesuit mission in the Philippines, a role he was performing when Japan invaded the Philippines in 1941.

Father Hurley not only resisted Japanese attempts to confiscate the Ateneo de Manila property but also ran a smuggling network that delivered food, medicine, and money to civilians and Allied soldiers being held in internment camps around Manila. Many times he courted danger, as when he risked Japanese reprisals by sheltering three U.S. servicemen who had escaped from the nearby Bataan Peninsula. Father Hurley was eventually interrogated by the Japanese and interned in the Santo Tomas camp, where he served voluntarily as a hospital orderly.

Deteriorating conditions brought many to the point of starvation, and Father Hurley’s own weight had dropped to 115 pounds—from 208—by the time the camp was liberated by the U.S. Army in 1945. Less than two weeks later, he was tasked with organizing the Catholic Welfare Organization (CWO) to coordinate relief efforts with the church, the U.S. military, and the Philippine government. He was awarded the Medal of Freedom by Gen. Douglas MacArthur for his wartime efforts, and served as the first secretary general of the CWO, a forerunner of Catholic Relief Services in the Philippines.

As leader of the CWO, Father Hurley worked with another Fordham alumnus—Francis Cardinal Spellman, archbishop of New York—and other church officials to seek funds for rebuilding Philippine religious institutions and compensating victims of the occupation. After pressing the U.S. Congress for several years, they helped secure at least $120 million in war damage claims for payments to American and Filipino internees and veterans and for reconstruction of Catholic schools, orphanages, and hospitals.

Father Hurley’s death in 1967, at St. Vincent’s Hospital in New York, was greeted with effusive tributes from newspapers in Manila, and his spirit survives in the close ties among Fordham, its sister university the Ateneo de Manila, and the Philippine people. His name is inscribed on the Fourteenth Station of the Cross in the University Church, and Fordham’s International Political Economy and Development program awards a John F. Hurley, S.J., Commendation in his honor.