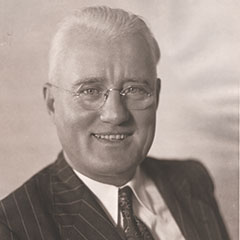 Considered by many to be the father of Fordham athletics, John Francis “Jack” Coffey brought national attention to the University’s sports teams with his larger-than- life persona and legendary silver tongue.

After graduating from Fordham in 1910, he enjoyed an itinerant 12-year career in professional baseball. In 1917, he played with the Detroit Tigers and the Boston Red Sox, becoming the only major leaguer to play with Ty Cobb and Babe Ruth in the same season. When his playing days ended, Coffey returned to Rose Hill to coach the Fordham baseball team, which he led, from 1921 to 1958, to five eastern championships and 14 metropolitan championships.

Coffey’s most lasting contribution to Fordham, however, came away from the diamond in his role as graduate manager of the University’s athletics program. Proficient in Latin and Greek and fluent in French, Spanish, German, and Italian, Coffey was an early master of public relations. As graduate manager, he helped usher in the Golden Age of Fordham Football—a time when the team received invitations to the Rose, Cotton, and Sugar Bowls, while regularly playing before sellout crowds at Yankee Stadium and the Polo Grounds.

Coffey served as graduate manager of athletics for 32 years, from 1926 to 1958, and graduate manager emeritus until his death in 1966. During that time, he impressed those who knew him with his phenomenal memory, reportedly retaining the names and birthdays of more than 3,000 people. Today, Fordham remembers its sportsman-scholar in all seasons. Jack Coffey Field is the home of the University’s baseball, football, and soccer teams.