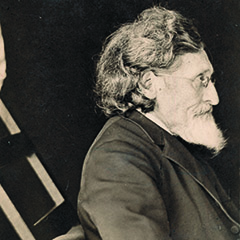 Celebrated today as the “father of American Catholic history,” John Gilmary Shea set the standard for future scholars and historians with his tireless research and prolific writing on American history and the history of the Catholic Church in America.

A graduate of St. John’s College, Shea entered the Society of Jesus in 1844 and remained a member of the order until 1852, when he left the Society to start his exhaustive study of the early Indian missions in America, which was published later that year. The following year, Shea’s “Discovery and Exploration of the Mississippi Valley” caught the attention of historians and critics.

Through his work as researcher, writer, and editor, Shea came to be recognized as the preeminent American Catholic historian of the 19th century. He compiled myriad school histories and textbooks, published numerous translations and adaptations, and contributed historical articles to various publications, including the U.S. Catholic Historical Magazine, of which he was the founder and first editor. His influence and renown also extended beyond the American Catholic community, as he counted such luminaries as Frederick Douglass, Thomas Edison, and Harriet Beecher Stowe among his many correspondents and admirers.

Between 1886 and 1892, Shea published his four-volume History of the Catholic Church in the United States. The crowning achievement of his life’s work, it remains an invaluable resource to present-day historians seeking to understand the American Catholic experience. Today, Shea’s legacy is carried on at Fordham through the work of the Francis and Ann Curran Center for American Catholic Studies, an interdisciplinary center for the academic study of issues of faith and culture in the United States.