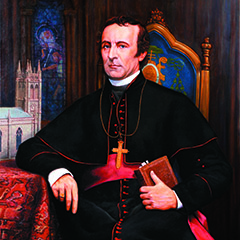 Archbishop John Hughes, who founded Fordham University as St. John’s College in 1841, considered his ambitious plan for Catholic higher education a “daring and dangerous undertaking.” Priest, administrator, orator, writer, builder, and fundraiser extraordinaire, he was a man of exceptional courage and unmitigated confidence, who understood instinctively that education is the key to success and first-class citizenship for immigrants.

Born in Annaloghan, County Tyrone, Ireland, Hughes immigrated to the United States with his family in 1817. He entered the seminary at Mount St. Mary’s College in Emmitsburg, Maryland, two years later. Ordained to the priesthood in 1826, he was named coadjutor (assistant) bishop of the Diocese of New York in 1837. He succeeded John Dubois as bishop five years later and became an archbishop in 1850, when Pope Pius IX elevated the status of the diocese in recognition of New York’s growing immigrant population and increasing influence on the national stage.

One of his earliest and highest priorities in New York was to establish a college and seminary for the future of his flock. In 1839, he purchased land in the farming village of Fordham and, less than two years later, opened the doors of St. John’s College to its first six students. At the same time, he also established an independent Catholic school system throughout the diocese.

In Archbishop Hughes, Catholics of New York found both a spiritual shepherd and political pit bull, whose influence extended well beyond the metropolis. Nicknamed “Dagger John” in part because he signed his name with a cross, he was a fierce defender of the Catholic faith against anti-immigration movements. By 1859—a year after he laid the cornerstone for the current St. Patrick’s Cathedral on Fifth Avenue—he had dedicated 97 churches and established no fewer than 61 new parishes and parochial schools. In 1861, he traveled to Europe, at President Lincoln’s request, to garner and reinforce support for the Union during the Civil War.

Archbishop Hughes’ spiritual and political legacy is felt throughout present-day New York. At Fordham, we celebrate his vision and his lifelong commitment to education, which transformed a small college in a farming village in Westchester County into the Jesuit University of New York, the Jesuit University of the capital of the world. Archbishop Hughes’ “daring and dangerous undertaking” continues to unleash a corps of ethical graduates who transform lives within their engaged, discerning wisdom. Si quaeris monumentum, circumspice. If you are looking for a monument to this man, just take a look around you.