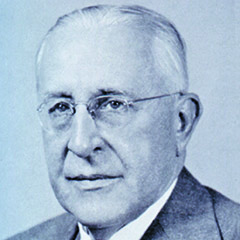 When Nobel Laureate Victor Francis Hess emigrated with his Jewish wife from Vienna to the United States in 1938 to escape Nazi persecution, he quickly found a professional home at Rose Hill.

A native of Austria, Hess earned a Ph.D. in physics from the University of Vienna in 1906 and later worked at the Physical Institute in Vienna, where he first began his seminal research in the field of radioactivity. By conducting atmospheric readings while making several ascents in a hot- air balloon, Hess discovered cosmic rays—high-energy radiation originating in outer space. This breakthrough opened the door to many new discoveries in nuclear physics and earned Hess the 1919 Lieben Prize and, in 1936, the Nobel Prize in Physics.

Before coming to Fordham, Hess conducted research and taught at the universities of Vienna, Graz, and Innsbruck. From 1921 to 1923, he lived and worked in the United States, as the founding director of the research laboratory of the U.S. Radium Corporation, in Orange, New Jersey, and a consulting physicist for the U.S. Department of the Interior, Bureau of Mines, in Washington, D.C.

Hess returned to the University of Graz in 1923 and was made a full professor in 1925 and dean of the faculty in 1929. Two years later, he became professor of experimental physics and head of the institute for radiation research at the University of Innsbruck, where he founded the station at the Hafelekar Mountain for observing and studying cosmic rays. Hess returned to the University of Graz as professor of physics and director of the physics institute in 1937. Two months after the German annexation of Austria in March 1938, however, he was dismissed from his post. Four weeks before the order came for his and his wife’s arrest, Fordham offered Hess a full professorship.

During the single-longest appointment of his career, Hess served on Fordham’s faculty until his 1956 retirement, training the next generation of physicists at Fordham. In 1958, the University presented Hess with its highest honor, the prestigious Insignis Medal, which is awarded to “Catholic leaders for extraordinary distinction in the service of God” through excellent performance in their professions.