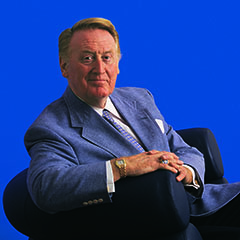 Vin Scully is more than just the voice of baseball. For generations of fans, the longtime Dodgers broadcaster will forever be the voice of summer and promise, from Brooklyn’s Flatbush Avenue to Los Angeles’ Chavez Ravine. His minimalist approach to broadcasting is one of baseball’s signature treasures, elegant and evocative in its simplicity and grace.

Born in the Bronx, Scully grew up in Washington Heights. He attended Fordham Preparatory School before enrolling at Fordham University, where he briefly played outfield for the baseball team and later called Fordham baseball, basketball, and football games for WFUV (90.7 FM), Fordham’s noncommercial radio station, which was founded in 1947, Scully’s sophomore year.

After graduating, Scully was hired by Red Barber, the legendary sports director of the CBS Radio Network, to cover college football. Later, he joined Barber and Connie Desmond as the third member of the Brooklyn Dodgers’ radio and television broadcast team. After Barber left to work for the Yankees at the end of the 1953 season, Scully took over as the Dodgers’ primary announcer, a position he’s held for more than seven decades, the longest tenure of any current sports broadcaster with one team. Today, the press box at Dodger Stadium bears his name.

Though he broadcast other professional sports, including games for the National Football League, Scully is most famous for his baseball work. His legendary calls are synonymous with some of the national pastime’s most iconic moments: Sandy Koufax’s four no-hitters; Don Larsen’s perfect game in the 1956 World Series; Hank Aaron’s 715th home run; Bill Buckner’s error in Game 6 of the 1986 World Series; and Kirk Gibson’s pinch-hit home run in Game 1 of the 1988 World Series.

In 2008, WFUV presented him with a lifetime achievement award, which is now known as the Vin Scully Lifetime Achievement Award in Sports Broadcasting, an inspiration for generations of young men and women guided by Scully’s unimpeachable standards of professionalism, excellence, and perfection of craft.